Hello family and welcome back to another emotionally charged, ultra-opinionated and unabashedly anti-climactic episode of boxing’s number one mid-afternoon leisurely cup of tea, The Sunday Brunch. We are uncharacteristically vague in our assessments today, so hold onto your favorite issue of Ring Magazine and grab a box of tissues, we’re about to hose down the 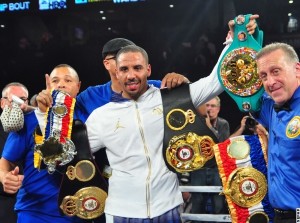 proverbial titties of the boxing community with a massive gush of preconceived notions, boxing idioms and pop culture references.   With that being said, I gave you your instructions in the dressing room, what I say you must obey – Cuidate, escucha me, toca los manos y buena suerte…Let’s get it on!

Super middleweight champion Andre Ward returned to action Saturday, fresh off the heels of a lengthy 14 month break from the sport. The Californian looked relatively sharp in his ring return and while not everything was perfect, it seemed like the things that weren’t working so well were obvious to Ward. While the “S.O.G.” was tagged cleanly a few more times than most are used to seeing, Ward’s own shots were damaging his challenger and that kept the contest fairly one-sided throughout.

Some would say that Andre Ward looked good, but not spectacular in defeating a second-tier fighter in Edwin Rodriguez. I contend that Andre Ward has been out of the ring for 14 months due to injury and it says a lot about the character of a man when he can distance himself from the sport he’s no doubt dedicated a tremendous amount of time to, come back and look like a world class fighter.

That’s not to say that Ward’s return bout was flawless, however. He looked good but not great, solid but not spectacular.  Many people are trumpeting Andre Ward as pound for pound, the number two fighter in the sport – HBO’s announce team declared that louder than anyone during their broadcast of Ward’s comprehensive 12 round victory over Edwin Rodriguez Saturday night.

Some care has to be given when investing thought into mythical pound for pound rankings. Last year, when everybody’s favorite new Filipino fireball was lauded so high on the ‘lists’, he was mercilessly beaten back down to earth by a man that HBO should be touting as loud as Ward, Guillermo Rigondeaux.

Rigondeaux’s overall skill set, reflexes and ring knowledge make him one of the most dangerous fighters to ever grace the lower weights. Speaking about “pound for pound” should mean that all things remaining equal, skill for skill, how would a fighter rate in any division? – it’s a fantastical measurement of skills, transcendent of weight classes.

Andre Ward most definitely deserves a spot on even the most discerning pound for pound fantasy list. When speaking about the Oakland fighter, the comparisons to Floyd Mayweather flow easy and free from the adoring media and corresponding super fans.  according to that logic. While being mentioned in the same breath as the number one fighter in the world, some context must be taken into consideration; some clarification must be applied, for clarifications’ sake.

Floyd “Money” Mayweather took a 21 month mini-retirement from boxing during 12/2007 to 09/2009 and came back to fight the (then recognized) number two fighter, pound for pound in the world. The match, as many will remember was, statistically speaking, one of the single most one-sided dominations in recorded boxing history.

Mayweather kept future hall of fame lock, Juan Manuel Marquez in single digit connects throughout the entire contest (and if you have seen the fight you know that none of those few accounted for punches actually landed on Mayweather). The bout was so lopsided that people began to cry foul. “Floyd Mayweather is too big for Juan Manuel Marquez!” detractors would declare (these same people, at the very same time wanted Mayweather in the ring with Manny Pacquiao, who is actually a bit shorter than Marquez…).

But I digress. To Ward’s credit, though, he never claimed he was the second best in the sport. At the post-fight press conference, a thoughtful Ward reflected on his career…”I don’t know how much longer I have in the sport. I am not talking about next week retiring….I’m not going to be the 40 year-old boxer I promise you. I got 20 years in this sport, 20 years of giving max effort, giving everything I have. Even though I missed the sport this last 14 months, I enjoyed my time off…I don’t know how much longer I got in the sport. I feel like we got a few more years in us.”

“I really think Brandon Rios is in trouble” – Freddie Roach

My take: I think Manny Pacquiao is at a very pivotal point in his career and he is wise and introspective enough to know that if he doesn’t push himself now, then this could be his last opportunity at relevancy in the modern boxing landscape. The possibility of a long awaited bout with the sport’s premier fighter, Floyd Mayweather could also depend on the outcome of this bout.

“Will it be emotional for me to leave my family behind? No.” – Brandon Rios

The way I see it is, Rios inherently has most of the tools to defeat a Manny Pacquiao, what he is missing is the very thing that Pacquiao will expose of him on the biggest stage. The Filipino has too much speed, experience and firepower for the iron jawed Mexican American. I agree with Freddie Roach – Brandon Rios is in trouble.

Thanks for joining us again this week, team; another luxuriously appointed Sunday Brunch awaits you next time. We’ll be back with our regular randomly assembled catch phrases, penis jokes and Adrien Broner-isims. Until then, santé.