While it is still relatively new in Macau, China, boxing makes a huge splash this weekend when global icon Manny “Pacman” Pacquiao (54-5-2, 38 KOs) returns from a devastating KO loss to Juan Manuel Marquez last December, to face brash young Mexican brawler, Brandon “Bam Bam” Rios (31-1-1, 23 KOs). Operating as the main support to Pacquiao’s return will be the IBF featherweight title rematch between current titleholder Evgeny “The Mexican Russian” Gradovich (17-0, 8 KOs) and former titlist Billy “The Kid” Dib (36-2, 21 KOs). A tussle between heavyweights Andy Ruiz Jr. (20-0, 14 KOs) and Tor Hamer (21-2, 14 KOs) takes the stage in the second televised bout of the night, and Chinese star Zou Shiming’s third pro fight will open the HBO Pay-Per-View Boxing Telecast. The Cotai Arena at the Venetian Resort in Macau, China is where it all goes down, with HBO set to go live at 9:00 PM ET/6:00 PM PT. 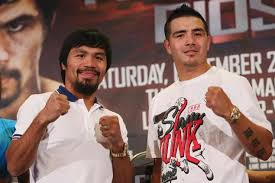 Pacquiao, who since the middle of the last decade has solidified his place amongst America’s attractions, makes his debut fighting in the untapped Chinese market. With over a billion citizens, money to throw around, and very little regulation, Bob Arum and Top Rank Promotions would have a very easy time making Macau the new adopted home of their prized cash cow.

Pacquiao has remained inactive since last December’s stunning one-punch knockout loss to Juan Manuel Marquez, a fight he was winning before he was caught leaping in with his chin high and exposed. Many have questioned Pacquiao’s dedication to the sport since his election to Congress in his home nation of the Philippines, but those around him maintain the position that his love for boxing has not waned. Prior to the loss to Marquez, Pacquiao wound up on the wrong end of a horrible split decision loss to Timothy Bradley. The loss to Bradley, despite its lack of validity in the eyes of most, snapped a 15-fight win streak dating back to Pacquiao’s March 2005 unanimous decision loss to Erik Morales. It was during the aforementioned win streak – with wins over Oscar De La Hoya, Ricky Hatton, Juan Manuel Marquez (twice), Miguel Cotto, and Antonio Margarito – that Pacquiao ascended from exciting undercard attraction to full-fledged pay-per-view star and bona fide number-two cash cow in the sport.

Rios, the former lightweight titlist who outgrew his division is coming off the first loss of his career; a disheartening unanimous decision loss to rival Mike Alvarado back in March. Rios won the first meeting between the two by way of referee stoppage in the seventh of seven thrilling rounds, but was unable to adjust to a Mike Alvarado who came in with a plan to avoid slugging it out with the slugger. While Rios’ reign as the WBA lightweight titlist was short-lived (he lost the title on the scale before his second title defense and lost his right to win the title on the scale again in the very next fight), he’s remained front and center as a key piece of Top Rank’s stable of young stars.

Expect this fight to be fought with each man throwing caution to the wind and dispensing with the “feeling each other out” portion of the fight relatively early on. Pacquiao, for all his physical gifts, is an aggressive fighter who has few dimensions, while Rios is the face-first brawler with the style that fits right into Pacquiao’s strengths like a custom-knitted glove.

Rios is slow on his feet and can be caught lunging in from the outside, where his effectiveness suffers. Rios is at his best when he’s on the inside, and with an opponent willing to stand and trade with him, Rios can break him down and end the fight brutally in the later rounds. He’s consistent with his body work, which may be his best trait.

Pacquiao is a whirlwind of odd angles and frenetic moves in and out of close range. Pacquiao jabs well both up and downstairs, and has developed a good short right hook over the years. But his real money punch is his left hand. He doesn’t always throw it straight down the middle, and that may the the beauty of it. Whether by design or by accident, Pacquiao’s left hand comes straight down the pike, looping around your guard, over the top, or straight into your midsection. The problem with Pacquiao is he can be predictable. If one can pick up on his timing, one can catch him leaping in and hit him while he’s exposed (see Juan Manuel Marquez, December 8, 2012).

As stated earlier, Rios’ style is tailor-made for Pacquiao. While Pacquiao himself and everyone around him insists his confidence is not shaken and he’s still the killer everyone once knew and loved, Rios is just what the doctor ordered. In addition to being lobbed a softball the size of a basketball, Rios also allows for Pacquiao to likely put on a thrilling, albeit one-sided, show in front of a massive audience in a market not yet infected with Pac-mania.

Expect Rios to come forward while Pacquiao dances in and out, peppering him with jabs and left hands before hopping out and keeping him turning and searching. You’ll likely see plenty of Rios’ enthusiastic smile and banging of gloves as he waves Pacquiao in, but around round seven his enthusiasm will have left, in its place will be fatigue and frustration. Pacquiao will carry Rios through to the later rounds before forcing referee Genaro Rodriguez to step in and save Rios from himself and his corner.

The co-main event between IBF featherweight titlist Evgeny Gradovich and former beltholder Billy Dib is a rematch of Gradovich’s upset victory over Dib earlier this year. Gradovich came in on one month’s notice as the underdog to then-champion Dib. Gradovich overcame deficits in experience, height, and reach to outwork Dib, who stepped up his work rate but looked uncomfortable at times. Gradovich is a very one-dimensional fighter who comes forward behind a stiff jab. Defensively he fights from behind a high guard, catching punches on his gloves and countering any available openings.

Dib has not consistently fought like the entertaining fighter who lost his title in March. He’s been criticized for his safe approach at times, but against Gradovich, whether by his own volition or as primal response to the fighter in front of him, Dib opened up offensively. Dib is a good body puncher, but he’ll occasionally uncork one or two that will land below the belt. He is a fighter who moves quickly, but mostly forward and back; he doesn’t offer a lot of lateral movement and can be hit.

Stylistically, Gradovich has the edge over Dib, who lacks consistency and isn’t comfortable fighting at such a high rate. But Dib has much more experience, and with a full training camp preparing for Gradovich under his belt, he may be more prepared to deal with Gradovich’s aggression. Gradovich is easy to time on his way in, and if Dib spent enough of his training camp working on timing Gradovich’s advances he should edge this one by a few points.

The lone big men on this fight card are both young heavyweights with an eye on the future. The brighter future belongs to Andy Ruiz, the former Mexican Junior Olympic Gold Medalist now trained by Freddie Roach. Against club-level opposition, Ruiz has looked a step faster than the rest and he lands with good power, much like a younger Chris Arreola. And like Arreola, Ruiz struggles to walk away from the dinner table, and he may find the extra weight a hindrance as he moves up to start facing better opponents.

Hamer was, at one time, a well-regarded prospect on display on Lou DiBella’s “Broadway Boxing” series. A 2010 loss to Kelvin Price set Hamer back, and he wouldn’t be relevant again until winning the June 2012 PrizeFighter UK Heavyweight Tournament, with the final win coming over former heavyweight world title challenger Kevin Johnson. Hamer parlayed his PrizeFighter victory into a showdown with Vyacheslav Glazkov six months later, but his shot was spoiled when he quit on his stool after the fourth round, citing an injury as the reason behind it.

The opening bout will feature two-time Chinese Olympic Flyweight Gold Medalist Zou Shiming’s third pro bout. Shiming, already 32 years of age, will likely be moved at a fast pace on the path of least resistance. His first pro contest was met with much fanfare, and was the first ever pro debut televised on HBO. Shiming won a rocky 4-round decision over Eleazar Valenzuela (2-1-2) in April, and was back at it against Jesus Ortega (3-1) in a 6-round contest just three months later.

Shiming’s opponent on Saturday night will be Mexican jr. flyweight Juan Tozcano (4-0, 1 KO). The fight is scheduled for six rounds.