It was announced earlier today that undefeated Irish heavyweight Tyson Fury (21-0, 15 KO’s) has retired from professional boxing. The announcement was made by Fury himself via his 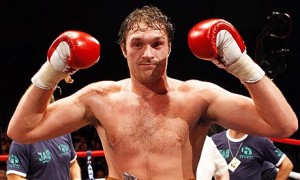 twitter account in a posting that read “Hi every1 I have officially retired from boxing. There’s to many bent people in the sport. They will have to fuck some1 else. Good by boxin”. Few took the announcement seriously, but Fury followed up with this: “Just to confirm I’m not in a bad mood or anything. I’ve retired 1000000% no matter what ill never fight again!”

The announcement comes on the heels of the breakdown of a U.K. mega-fight between Fury and David Haye, a highly anticipated bout that was at first postponed due to an injury to Haye. The bout, rescheduled for early 2014 was scrapped altogether when Haye pulled out for a second time citing a shoulder injury.

Fury entered the pro ranks in 2008, and in his eighth outing, won the BBBofC English heavyweight title by taking 10 round decision over John McDermott. In 2011, he defeated Dereck Chisora to add the Commonwealth (British Empire) heavyweight title to his credits, and in 2012 would go on to take the Irish heavyweight title and the WBO Inter-continental heavyweight title as well. He last fought former cruiserweight champion Steve “U.S.S.” Cunningham at Madison Square Garden, where he was dropped in the second round, but went on to win by seventh round knockout.

Fury and his team were said to be in talks for a February bout with undefeated American Deontay Wilder, who is 30-0 with 30 knockouts.

[Editor’s Note: Per ESPN UK, the retirement has been denied by Fury’s uncle and trainer, Peter Fury.]