Rios’ style is tailor-made to give Pacquiao little to no trouble, while allowing him to do what he does best on a huge stage in front of millions. Rios will press forward early on, Pacquiao will dart in and out and pepper him with shots until Rios starts to wilt. Rios can take a huge punch and 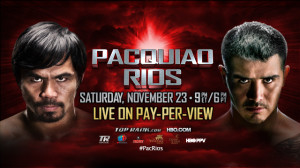 will finish the fight on his feet after the ref does what Rios’ corner won’t do and stops the fight in the later rounds. Pacquiao TKO9

In the ring, Manny Pacquiao’s only trouble has come against counter punchers and Brandon Rios doesn’t counter, patience isn’t his game, he comes forward, that’s it. Two fighters who’ve used that pressure style against Pacquiao were Antonio Maragrito and Oscar De la Hoya and their faces were rearranged for their troubles. We’ve seen Rios be outboxed by Richar Abril and Mike Alvarado, none of whom are in Pacquiao’s league. For Rios to have a chance, he has to hurt Pacquiao early and force him to back up the rest of the fight. The Filipino has stood up to bangers like Miguel Cotto and Margarito, so to think that a glorified lightweight can hurt him is a stretch. Unless Rios magically pulls some counter punching skills out of a hat and Pacquiao walks into one, look for this to be a one-sided affair. Pacquiao wins by TKO Rd 10.

There’s no doubt that this one will be entertaining for as long as it lasts because Rios only knows one way to fight– coming straight forward– and Pacquiao, with his frenetic style and energy, is inherently entertaining in the ring. But there’s just a huge disparity in talent and ability in this fight and, unless Rios can shock the world with an entirely new skill set and ring attitude, he’s likely to be walking into a thrashing machine. Don’t count on Pacquiao being gun shy or rattled from his KO loss to Marquez. On the contrary, expect him to be wiser in his output, something that will make the fight even more one-sided than it would normally be. Pacquiao via Robert Garcia rescue of Rios in round eleven.

When Manny Pacquiao meets Brandon Rios on Saturday night, he will be fighting someone whose gutsy but limited come forward style is tailor-made for him. However, we do not yet know how Pacquiao will be when he throws and catches leather for the first time since his devastating knockout to Juan Manuel Marquez last year. If Manny is anything close to his best then he will be too strong and too quick for Brandon, if however he is carrying some psychological or physical scars from the Marquez defeat, then this could be much closer than expected. Personally I think that even a faded Pacquiao will still have too much for Rios, and I’m going for a Pacquiao win either by late stoppage or on points.

This one is going to come down to a simple equation – Manny Pacquiao’s speed + experience versus Brandon Rios’ chin + tenacity. It’s easy to envision a scenario where the Mexican American overpowers and eventually grinds down a shopworn Pacman, however, the opposite may be closer to the truth. Manny Pacquiao’s precision movement and ripping counter punches will prove a gulf too far for the limited brawler to cross. Look for the Filipino flamethrower to use his gifts to swarm, overwhelm and eventually stop the much too brave Rios sometime before the 10th round.

Other than a puncher’s chance, I don’t see Rios having much of a shot here.  His style will play right into the hands of Pacquiao, who’s the smaller of the two, but holds a significant edge in every other department.  As tough as he is, Rios doesn’t fare well with faster, more mobile opponents like we saw against Richar Abril or Mike Alvarado in the rematch.  Forget about Manny’s loss to Marquez:  as devastating as that was, it was a perfect shot delivered by a world class counterpuncher, which Rios is not.  Rios’ aggression will keep it close early, and make it fun to watch, but once Manny finds his range, the fights all his.  Pacquiao wins by unanimous decision.