This Saturday, November 30, Adonis “Superman” Stevenson (22-1, 19 KOs) defends his WBC light heavyweight title against Liverpool’s own Tony “Bomber” Bellew (20-1-1, 12 KOs) back in front of his adopted hometown crowd at the Colisee de Quebec  in Quebec City, Quebec, Canada. HBO will broadcast the fight on its Boxing After Dark series beginning at 10:15 PM ET/7:15 PM PT. Sergey Kovalev’s WBO light heavyweight title defense against Ismayl Sillakh is the co-feature on the televised undercard, with a potential Stevenson-Kovalev title unification looming on the horizon. 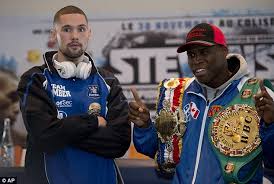 Stevenson’s immediate future looks bright. A year ago, Stevenson languished on the super middleweight title contender circuit, unable to parlay his number-one contender spot into a shot at Carl Froch and his IBF belt. A move up to light heavyweight for a shot at Chad Dawson proved to be the best move for Stevenson, and it took him only 76 seconds to capitalize.  Stevenson made the first defense of his title just two months ago, when he became the first person to stop former IBF light heavyweight titlist Tavoris Cloud.

Bellew has a chance to play spoiler on Saturday night. With a potential title unification bout against Sergey Kovalev looming, Stevenson doesn’t want to get caught looking ahead to what might be. Bellew, a known commodity across the pond, has yet to prove himself against the elite class. A win over journeyman Edison Miranda in 2012 showed Bellew was more than a stepping stone for young British light heavyweights, and a pair of fights – one a split draw and one a win – against Isaac Chilemba were enough to get Bellew on a short list of guys in line for a title shot.

This is a fight with two guys short in the ways of some of the finer points of the sport, and heavy in the ways of putting on entertaining fights. Stevenson, a southpaw trained by Sugar Hill, nephew and protégé of the late Emanuel Stewarrd, has developed a steady jab. Behind a stiff jab he sets up his power punches. His left hand is his bread and butter, but he’ll occasionally mix in a short right hook off of his jab and in counter. Bellew is the cruder brawler of the two, but he too possesses a decent jab. Coupled with his almost 4-inch height advantage, the jab can be a formidable weapon for Bellew. Stevenson is the more athletic of the two, and holds a significant power advantage.

Despite Stevenson’s dedication to his jab, he will make some technical mistakes in the ring. It is up to Bellew to capitalize on them when he sees them. But Bellew isn’t the most polished boxer and is just as technically flawed as Stevenson. Bellew has shown more durability in the ring, but he hasn’t yet been tested against someone with Stevenson’s power. Stevenson should have issues getting around Bellew’s jab in the early going, but he’ll land enough to knock Bellew out of his game plan. Stevenson has shown enough skill to be able to outbox the likes of Tavoris Cloud, and he should be able to do so with Bellew.

Bellew has earned a reputation for his toughness and grit. His resume is respectable, but not exemplary. His lone loss came to Nathan Cleverly in 2011, and he’s gone on to log wins over Edison Miranda and Isaac Chilemba since. He’s taking a significant step up in class, and after some early success he’ll find himself moving backwards and on the defensive. Stevenson will put an end to the fight sometime around the eighth round, when accumulation of punishment will force the stoppage of the fight.