Saturday night, undefeated Adrien “The Problem” Broner (27-0, 22 KOs) puts his undefeated record and WBA welterweight world title on the line against Argentine slugger Marcos Maidana (34-3, 31 KOs) at the Alamodome in San Antonio, Texas. With a quality main event that promises to be a major test for both fighters, the under card features three world title match ups, two U.S. Olympians, and a former world champion working his way back into world title contention. 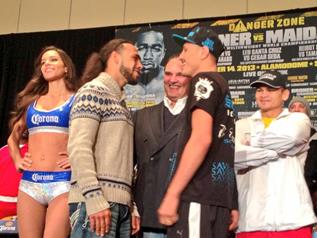 In a welterweight showdown, Keith Thurman (21-0, 19 KOs) defends the interim WBA welterweight title against Jesus Soto-Karass (28-8-3, 18 KOs). As evidenced by his record, Thurman’s a force to be reckoned with; nine of his last 10 bouts have ended in knockouts. Prior to winning the interim title in his last outing (KO 10 over Diego Chaves), Thurman held the WBO Inter-Continental welterweight and the WBO NABO light middleweight titles. No stranger to the spotlight, he’s been featured on ESPN, and multiple HBO and HBO PPV shows.

Soto-Karass is a seasoned veteran with over 13 years in the pro ranks. He’s a former holder of the WBC Continental Americas welterweight and NABF welterweight belts, and recently regained the NABF strap when he stopped Andre Berto in the 12th round this past July in a bout that was dead even going into the final frame. Prior to 2013, it seemed that he would fall short when faced with a higher class of opposition, but he changed that all this year by defeating then once beaten and regional title holder Selcuk Aydin in January, then topping that with the Berto victory seven months later.

WBC super-bantamweight champion Leo Santa Cruz (25-0-1, 15 KOs) defends his world title against Cesar Seda (25-1, 17 KOs). Santa Cruz is coming off a third round knockout of Victor Terrazas in August; the fight that won him the WBC title. He’s also held the IBF bantamweight title which he defended three times before moving up a division to win the USBA super-bantamweight belt en route to the world championship.

Seda is a former regional title holder who’s on a five fight winning streak. The Puerto Rico native failed in his last, and only, bid for a world title when he was outpointed over 12 rounds by Omar Narvaez for the WBO super flyweight title. His last bout was an eight round decision over Miguel Tamayo in May. This is easily the biggest fight, and best opponent of his career.

Kovacs is your run-of-the-mill opponent. The former WBF and WBO European light heavyweight champ has an impressive record on paper, but hasn’t fought anyone on Shumenovs level. Over the last two years, he’s fought four times, all being six or eight round scheduled contests.

Former world middleweight champion Jermain Taylor (31-4-1, 19 KOs) continues his comeback against journeyman Juan Carlos “JC” Candelo in a 10 round attraction. Since a two year hiatus after suffering brutal back to back knockout losses to Carl Froch and Arthur Abraham in 2009, he’s won three bouts, two by stoppage over lower-level opposition. He last fought 14 months ago, stopping Raul Munoz in two rounds.

JC Candelo’s been around the pros for nearly 20 years. The former NABF light middleweight and WBC United States light middleweight champ has been a regular on ESPN, and has been in the ring with solid opposition, though the results of those bouts don’t always pan out in his favor. Over the years he’s met with the likes of Kassim Ouma, Verno Phillips, Winky Wright, and Fernando Guerrero. He lost his last two contests, both in 2012, the last being against Guerrero via sixth round stoppage.

A pair of U.S. Olympians continue their young pro careers among the night’s opening bouts. Rau’shee Warren (8-0, 3 KOs) meets Jose Silveira (15-9, 6 KOs) in a scheduled eight rounder. Warren, a three time Olympian, is fighting for the seventh time this year: this is his first eight round contest.

From the 2013 Olympic Games, lightweight Jamel Herring (5-0, 3 KOs) makes his sixth ring appearance of the year against Lance Williams (6-2, 6 KOs). Williams has a 100% knockout ratio all around: all of his bouts have ended inside the distance.