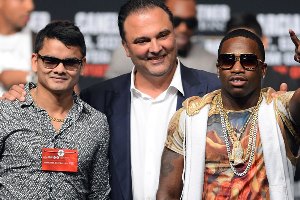 Broner is a three-division world titlist. His first title win was for the vacant WBO junior lightweight title. Broner stopped little-known Vicente Martin Rodriguez in three rounds to win the title. He made one defense of his title, a stoppage win over Eloy Perez, before losing the title on the scales prior to his next defense against Vicente Escobedo. Broner was immediately back in title contention in his next fight, an 8-round TKO victory over Antonio DeMarco, who held the WBC lightweight title at the time. After one defense against Gavin Rees, Broner moved up to welterweight to challenge Paulie Malignaggi. This will be Broner’s first defense of the WBA welterweight title he took from Malignaggi.

Maidana burst onto the scene with a stoppage win over Victor Ortiz. Maidana was dropped three times in the fight, but got up each time and fought his way back into the fight, scoring two knock downs in the process. After the second knock down, Ortiz elected not to continue fighting. With the win over Ortiz, Maidana won the Interim version of the WBA’s junior welterweight title, just one fight after losing in his bid for Andriy Kotelnik’s WBA World junior welterweight title. Since the win over Ortiz, Maidana has parlayed his success into multiple premium cable television slots. Maidana made the move up to welterweight last year and stopped Jesus Soto Karass on the undercard of Canelo Alvarez’s mismatched win over Josesito Lopez. Maidana stopped Josesito Lopez in June, but was behind on the scorecards at the time of the stoppage.

Broner’s strengths lie in a rare blend of natural ability and a growing repertoire of tricks that make him a formidable fighter. During his days as a junior lightweight and lightweight, Broner displayed exceptional power, but he was unable to do any serious damage to Paulie Malignaggi after jumping two divisions up to welterweight. Malignaggi has always shown good defense and a solid chin, and his stoppage losses came against aggressive fighters who put a prolonged beating on him. Broner, for all of his talents and early-career accolades, is not known for a high offensive output, and his power as a welterweight shouldn’t be entirely overlooked at this point. Broner is at his best when he’s popping his jab and following it up with lightning-fast combinations. Too often, however, he falls into long periods of looking for one punch at a time. Defensively he puts a poor man’s version of the Mayweather shoulder roll into play, but his version isn’t quite as effective and he will be hit more than he should be. Broner is a small welterweight, and his only test at the weight was against a light hitting Paulie Malignaggi. It remains to be seen if Broner can withstand the relentless onslaught of a guy with serious power.

Maidana won’t ever be confused with a polished boxer. While he has shown slight improvements under the tutelage of Robert Garcia, his bread and butter is his high output and skull-rattling power. He has power in both fists, but his right hand is often his best punch. Far too often he throws wide, looping punches and he is there to be countered. Maidana only occasionally walks in behind his jab, and he will always be in close range where he can be countered. He’s been floored in the past, but he’s gotten up from some serious knockdowns to roar back into contention.

Broner should have no problem in keeping Maidana off balance with subtle lateral movement and quick counters. The mystery lies in how he’ll react when he’s hit flush. This will be Broner’s first test against someone with a big punch who won’t be deterred easily. If Broner is able to roll with Maidana’s punches when they land, he should have few issues in controlling the fight with his variety of offensive weapons, many of which will come from odd angles and may be punches Maidana won’t see coming. But if he gets sloppy, as he did in his fight with Malignaggi, we’ll get to see how Broner takes a serious welterweight punch.

Maidana will have to listen to Garcia in his corner, who will likely be imploring his charge to work behind the jab. It will be a key weapon in setting up his big right hands that he should throw downstairs early to take some gas out of Broner’s tank.

Broner is young, undefeated, confident and a fighter on the rise. His style lends itself to being able to give Maidana several kinds of trouble. Maidana was outclassed by Devon Alexander, whose deficiencies were exposed last weekend in his upset loss to Shawn Porter. Broner doesn’t have the same deficiencies as Alexander, and he should have little trouble in handing Maidana another loss to the tune of a 12-round unanimous decision.