When Jack Johnson won the world Heavyweight championship from Tommy Burns 105 years ago today, his victory sent shockwaves far beyond the boxing world. Johnson became the first African-American to wear the most coveted title in all sports. The World Heavyweight champion was recognised even by those who did not follow boxing, as the most powerful man on Earth, and when Johnson became the holder of this prestigious title, he exploded the myth that the white man was naturally superior to the black man. This was a bitter pill for many to swallow in 1908, where it still seemed natural for coloured fighters to be treated like second-class citizens, both inside and outside the ring. It was one thing to see smaller coloured fighters like George Dixon and Joe Gans, win world titles in the lighter divisions, but to lose the heavyweight crown to a black man was a disaster of unmatched proportions. 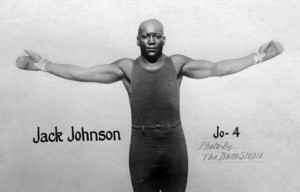 Johnson had literally chased Burns for two years, in his efforts to get a shot at Burn’s title, following him around Europe, and eventually to Australia. ‘The Galveston Giant’ was already viewed by many as being the best heavyweight in the world, having literally cleaned up the division from 1903 onwards. It was Johnson’s rise in the fistic ranks that had been one of the reasons for Jim Jeffries turning his back on boxing, and retiring while still heavyweight champion.

Although Burns had eventually secured the title, after beating Jeffries’ original successor Marvin Hart, he was not viewed with much confidence as regards his being able to beat a fighter of Johnson’s ability. Johnson was a strong and powerful fighter, but it was his speed and intelligence that really set him apart, and made him in many ways a boxer far ahead of his times. He was a superb counter-puncher with catlike reflexes, and almost impossible to hit with a clean shot. Johnson could easily have gone down in history as another great fighter who never gained a shot at the world’s heavyweight title, even though his right to such a fight was accepted by all, simply due to the colour of his skin. Like Peter Jackson before him, who was shamelessly ducked by John L. Sullivan and Harry Wills after him, (who was skilfully avoided by Jack Dempsey.) Jack Johnson could have gone down in history as another great ’champion’ who was never granted a title shot. Even many of those who hated him the most for his race would admit to his ability as a fighter. They just didn’t want him anywhere near a fight for the heavyweight championship.

Jack Johnson was determined to have his shot at Burns, fired by the knowledge that he was clearly the superior fighter to the champion in every way. Johnson followed Burns at every town, city, and country that the champion tried to hide in, while issuing a constant stream of challenges to Burns through the press. Eventually Burns gave in and agreed to defend his title against Johnson, but only after having secured a huge £30,000 purse, while Johnson himself had to agree to just £5,000. Burns had no illusions about the task ahead of him when he finally agreed to fight Johnson. Standing just 5’ feet 7” inches and weighing only 170 pounds, Burns was really little more than a light heavyweight, but he was a very strong and clever fighter, whose ability is often overlooked today, submerged beneath the beating he received when losing his heavyweight title to Jack Johnson.

The fight took place in Sydney Stadium, Sydney, Australia, in front of 20,000 spectators. Johnson had not a friend in the crowd, but he didn’t need them. Johnson played with Tommy for 14 rounds like a cat plays with a mouse, taking revenge for all the years he had chased and chased the title he believed was rightfully his. The sharpness of Johnson’s physical blows upon Burns were matched by his verbal blows, as he kept up an ironic verbal commentary on proceedings. Often telling Burns the punch he was about to him with, before he threw it. Even with such helpful information, Burns was still helpless to avoid Johnson’s shots.

The champion was tough and brave, but by the time the fight was stopped in the 14th round, Tommy Burns was a battered hulk, barely aware of where he was anymore. The fight was stopped when it was clear that Johnson, satisfied that he had proved him overwhelming superiority and settled some scores at the same time, was getting ready to put the finishing touch on the night, and knock Burns out, but that was one indignity from which the Canadian was spared.

Jack Johnson had done it; he had won the richest prize in sport. It would bring him wealth, worldwide fame, then infamy, tragedy, and bankruptcy.

Johnson, having waited years for his chance at the title, revelled in his victory. If he hadn’t lived like a champion before the Burns fight, he certainly did so afterwards.

At a time when most coloured people could only dream of a life of equality, Jack Johnson made it known that he wasn’t simply equal, but superior, both inside and outside of the ring.

Out of the ring, he enjoyed the finer things in life, fine clothes, fine food, bright and fast cars and bright and intelligent women, who were usually white. The fact that Johnson liked to live a cultured life seemed to torture his critics, even more than his prowess in the ring as time went by. It seemed to be the fulfilment of some of their darkest fears concerning the coloured race. That not only could a black man be the better of a white man inside the ring, but outside it too. The black man could have smart suits, good wine, go to concerts and the theatre, mix with high society, and furthermore be seen to be enjoying himself doing it. Jack Johnson’s gold-toothed grin taunted those that hated him as he enjoyed his life, even as they sought desperately to have him beaten inside the ring.

With every passing white hope that he defeated, Johnson’s grin would seem to get bigger and bigger, and the establishment eventually resorted to trying to have him incarcerated on trumped up charges of trafficking a white female across state lines, in order to have him silenced. An all white jury sentenced Johnson to a year and a day in prison for this dubious crime. Johnson would flee abroad and spend several years scraping for a living around Europe. He had the biggest prize in sport yet struggled to find opportunities to defend it.

By the time he fought the much younger and bigger Jess Willard in Cuba in 1915, Johnson was tiring of his constant running around Europe, tiring of his notoriety, and tiring of being world champion. After he had been knocked out in the 27th round by Willard, and lost his world heavyweight crown Johnson was almost relieved. In the end, the Heavyweight crown became something of a poisoned chalice for him, but the barriers, which he had broken down in such an outrageous fashion, could never be totally rebuilt. Even though it would be over 20 years before another coloured man would be allowed to fight for the world heavyweight championship, Jack Johnson had made an indelible mark, and punched an irreparable hole in the barrier holding back coloured boxers from fighting for the world heavyweight championship. When Joe Louis came along in the 1930’s, his progression to the heavyweight title was far smoother, than it would have been had there never been a Jack Johnson.

It took a Jack Johnson, arrogant, fearless, and determined to do what he wanted in life; to tread where no coloured fighter had gone before and make a path for all the coloured heavyweight champions who came after him. 56 years before Muhammad Ali would do it in his own inimitable way, Jack Johnson shook up the world.