Julio Cesar Chavez Jr. (47-1-1, 32 KOs) and Brian Vera (23-7, 14 KOs) are set for a rematch of their controversial first meeting last September. The rematch is set to take place on March 1 at the Alamodome in San Antonio, Texas at the super middleweight limit of 168 pounds, according to Bob Arum, who spoke to ESPN’s Dan Rafael. 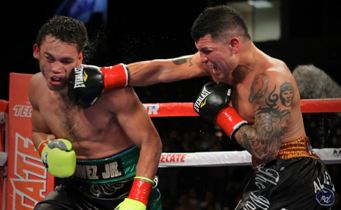 Chavez, who failed to make the 168-pound weight limit prior to their last fight, was granted a pass at having the weight limit raised to 173 pounds. Despite the considerable size advantage, Chavez was outworked and outhustled by the smaller Vera, but was given a wide unanimous decision victory.

A press conference to formally announce the fight is scheduled for Thursday in San Antonio, Texas. Orlando Salido’s (40-12-2, 28 KOs) WBO featherweight title defense against highly-touted Olympian Vasyl Lomachenko (1-0, 1 KO) will take place on the undercard and will also be announced at the press conference.