Two of the biggest Canadian box office attractions in boxing will face off this Saturday, January 18 when Jean Pascal (28-2-1, 17 KOs) and Lucian Bute (31-1, 24 KOs) do battle in what should be the biggest fight in the history of their adopted home nation. HBO World Championship Boxing will televise the fight live from the Bell Centre in Montreal, Quebec, Canada starting at 10:15 PM ET/7:15 PM PT. 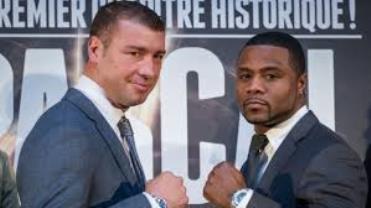 This fight should prove to be a good measuring stick to show where each fighter currently stands. Both men come up short when talking about the top-tier fighters in the light heavyweight division, but a clear and convincing with for either would put them a step closer to a title shot.

Bute, the former IBF super middleweight titlist, was once thought to be arguably the top 168-pounder in the world. But after Andre Ward won the Super Six super middleweight tournament and suggested Bute fight runner up Carl Froch, Bute was dismantled in five rounds. Bute returned in a new division seven pounds north with a shaky win over Denis Grachev in November 2012. A hand injury forced the postponement of his fight with Pascal, originally intended to happen last summer.

For Pascal, he’s been relatively inactive since losing his WBC and lineal light heavyweight titles to Bernard Hopkins in 2011, fighting only twice against lower level opposition. Prior to his loss to Hopkins, Pascal’s signature win was an 11-round technical decision win over Chad Dawson.

Lucian Bute is arguably the more accomplished of the two, despite suspect opposition during his title reign. A tall southpaw, Bute moves well, giving himself the space to land his powerful shots at a comfortable distance.  He throws a variety of punches, but his left hand is his bread and butter when thrown straight down the middle. He’s also developed a nice sweeping left uppercut that he throws to his opponent’s head or midsection. But as we sometimes see when a fighter detonates several uppercut bombs, he has fallen in love with the punch and occasionally throws it from too far out. What was once a suspect chin was confirmed by Carl Froch, and Bute’s often shaky defense makes hiding his chin a high priority from here on out. In his fight against Grachev, Bute looked like a gun shy shell of the fighter he once was. It is too early to tell if Bute was irreparably damaged, both physically and mentally, by the protracted beating dished out by Carl Froch, or if his adjustment to the new division was a little more than he’d bargained for.

Pascal’s strengths can be the difference maker in this fight if Bute fights timid and conservatively. Pascal has fast hands and is very strong on the inside. He fights aggressively and tries to overwhelm his opponents and smother them in close range. The knock on Pascal is his poor stamina, as he’s prone to fading in the later rounds of fights. His heavily muscled frame also hinders his fluidity. But despite some defensive flaws, Pascal has yet to be seriously hurt in the ring.

Bute will have to be prepared to weather an early storm on Saturday night. Pascal is a guy who will come out aggressive early, and as stated earlier, he’ll fade late. Pascal will need to eat Bute’s heart in the early rounds and hope he can get a clean shot on his chin that takes him out before he fades and lets Bute back into the fight. Bute will also have to use smart ring movement and a steady jab to keep Pascal at a distance if he hopes to avoid another early night. If Bute is able to do just that, he should be able to control a fading Jean Pascal, and possibly take him out in the later rounds.

It was not long ago that Bute was down and nearly out against rugged journeyman Librado Andrade. Had it not been for an extremely long count from Marlon Wright, Bute’s career might have looked a lot different. The images of a beaten Lucian Bute slumping at the feet of Carl Froch are still fresh in our minds, yet not as fresh as the timid and nervous Lucian Bute who squeaked by untested contender Denis Grachev in his last fight. Jean Pascal will get to Bute early on and control the pace of the fight, eventually taking him out sometime around the seventh round.