As former WBC heavyweight champion Vitali Klitschko fights a perhaps more dangerous political battle in his homeland of Ukraine against a Russian-backed government manipulated by Vladimir Putin, the World Boxing Council has settled on a fight to fill the giant void left by the 6′ 7″ tall now “Emeritus” champion, who still claims he may yet fight again in the squared circle. 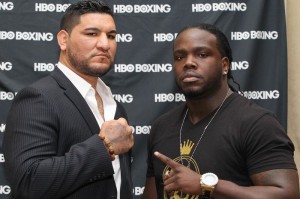 A purse bid had been scheduled this Friday for top contenders Bermane “B-Ware” Stiverne and Cristobal “The Nightmare” Arreola to stage a rematch for the vacant title, but an agreement has been already reached between the two parties to stage the event.

The Haitian-Canadian Stiverne (23-1-1, 20 KOs) dominated Arreola (36-3, 31 KOs) in impressive fashion in April of 2013, breaking the Mexican-American fighter’s nose in the process of dominating him over 12 grueling rounds which saw Arreola gamely hanging in despite his injuries.  Arreola’s trainer Henry Ramirez later admitted that he had trouble getting his charge down to business in training camp, a recurring problem in Arreola’s career.

For their next fight, against stumbling American heavyweight Seth Mitchell, Ramirez virtually locked up Arreola in a gym located in a remote location, leaving the fighter with nothing to do but train.

The results were impressive, as Arreola utterly destroyed Mitchell, stopping him in the first round.

A focused Arreola could make the rematch for the WBC title one of the more interesting fights of 2014.