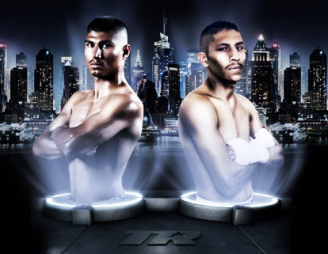 Garcia will be making the first defense of the title he took from Rocky Martinez in November. His eight-round TKO win over Martinez was his first fight as a junior lightweight, following last June’s failure to make weight for his featherweight title defense against Juan Manuel Lopez. And if we are to believe promoter Bob Arum’s intentions to eventually match Garcia against Manny Pacq        uiao are true, Garcia may not hang around the junior lightweight division for very long. After cutting ties with Golden Boy Promotions early in 2013, HBO is rebuilding its stable of stars, and Garcia is at or near the top of that list. Burgos doesn’t factor into HBO’s long-term plans, but he’ll provide quality rounds for Garcia.

Garcia made a big splash in 2013, winning three fights in convincing fashion. His title-winning effort against Orlando Salido in January was cut short after an accidental head butt broke Garcia’s nose and forced the fight to the cards after only 8 rounds. Garcia, who dropped Salido four times in the fight, was comfortably ahead on all three scorecards at the time of the stoppage. Garcia suffered a minor setback prior to his first title defense when he lost his title on the scales a day before meeting former featherweight titlist Juan Manuel Lopez. Garcia’s misfortunes, however, were short lived. Nary a negative word was said about his failure to make weight, or even use the allotted extra time to sweat off the last 2 pounds, and he scored a highlight reel knockout of Lopez in the fourth round. In his last fight, Garcia came back from an early flash knockdown and stopped then-WBO junior lightweight titlist Rocky Martinez.

Burgos comes into Saturday night’s main event with back-to-back split draws in his rear view mirror. Burgos fought only twice in 2013, his first was against Rocky Martinez and ended in a controversial split draw. Burgos took the fight to Martinez and controlled the pace throughout most of the fight, but at the end of the night, only one judge scored the fight 117-111 in his favor, another 114-114 a draw, and a third 116-112 in favor of Martinez.

Mikey Garcia is a polished boxer with a solid pedigree, having been trained by Garcia family patriarch Eduardo and former world champion and Brother, Robert Garcia. He has good balance and footwork and isn’t often out of position when letting his hands go. He has power in both hands and works well to the body, breaking his opponents down over the course of the fight. Garcia is most well-known for his counter punching ability and patience. He’s proven to be quite adept and finding holes in his opponent’s defense and exploiting them. At this point in his career, Garcia has not yet had any glaring weaknesses exposed, and only slight nits, such as his tendency to leave his chin exposed in exchanges or his tendency to start slow, can be picked at this point.

Burgos is tall and lanky with a frame that can support a quick move up to the lightweight division. A classic boxer-puncher, Burgos works well from behind his jab at a distance. Defensively he moves in and out of range with both back-and-forth movement and lateral movement. Burgos knows how to use every available inch inside the ring, and is a good defensive fighter and counter puncher. At times Burgos will hold his hands high and bob and weave just before stepping in and letting his hands go, effectively sending out advance warning that he’s about to punch. And as he’s prone to holding his hands so high, Burgos is vulnerable to jabs and crosses downstairs.

Burgos’ best shot at victory on Saturday night rests in executing for a full 36 minutes. He’s at his best when he’s moving to where he’s comfortable and setting up shop before letting his hands go. He’ll need to use every inch of the ring and hope he’s quick enough to keep Garcia from cutting off the ring and strong enough to hurt Garcia with his shots when he gets in close. But that is easier said than done and Mikey Garcia has the tools to walk through what Burgos will throw at him and go to work. Garcia starts slow and will need a round or two to figure out how to best deal with Burgos’ style, but once he does he’ll go to work on Burgos’ midsection to take away his legs. And once Burgos slows down and is unable to effectively move and box, he’ll be there for the taking. If it wasn’t for Burgos size advantage and ability to move, the stoppage pick would be the right pick, but expect Burgos to see the final bell and come up on the losing end of a close-but-comfortable unanimous decision.