Luis Collazo (35-5, 18 KOs) ended Victor Ortiz’s (29-5-2, 22 KOs) comeback with a stunning knockout before a ruckus Barclay’s Center crowd in Brooklyn, New York. The “Dancing with The Stars” alum entered the ring to heavy heat from the pro 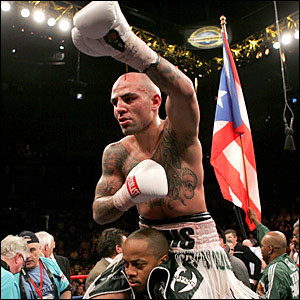 Collazo crowd and stayed locked in, while Collazo smiled and seemed relaxed. Ortiz began the fight surprisingly fast coming off of a 19-month layoff and multiple surgeries to repair a broken jaw. Although he didn’t land any notable shots, he threw combinations and feinted while bouncing in and out. In round 2 Collazo peppered Ortiz with his jab and landed the cleaner shots, to the crowd’s delight. At the end of the round Collazo landed a huge left hook that sent Ortiz reeling into the ropes and onto the canvas, where he stayed. The fight was called 2:59 seconds into round 2.

It was the battle of the unbeaten junior middleweights in the night’s co-feature, as Bronx resident Eddie Gomez (16-0, 10 KOs) took on Daquan Arnett (11-1, 7 KOs). Gomez came out to a rousing ovation that quickly turned into boo’s after the two combatants failed to produce anything of substance in round 1. In round 2 Gomez began to use his leverage to dig into the body of Arnett. In the rounds that followed Gomez continued to target Arnett’s rib cage first, while finishing his combinations up top. Arnett had some success pot-shotting Gomez with straight rights in round 5, but had the momentum taken from him as the bell rang to end the frame. Gomez dropped Arnett in round 7 with a left hook to the body, then continued his assault as a game Arnett tried to fend him off. Arnett incorporated a “shoulder roll” defense in round 8 and got the attention of both the crowd and Gomez when he landed cleanly with consecutive combinations. After an uneventful final round, Gomez was awarded the unanimous decision victory.

After a five month layoff, super featherweight stud Gary Russell Jr. (24-0, 23 KOs) returned to the ring to face Miguel Tamayo (14-8-2, 12 KOs) of Obregon, Mexico. Russell Jr.’s speed advantage became obvious in round 2, as Tamayo had no answer for his lightening quick combinations. By round 3 it became apparent that we were watching a glorified sparring session. In round 4 Russell Jr. connected flush with three consecutive right hooks; the third of which knocked Tamayo out 1:04 seconds into the round. It’s anyone’s guess how the Al Haymon-managed Russell Jr. continues to get television spots against opponents of this caliber.