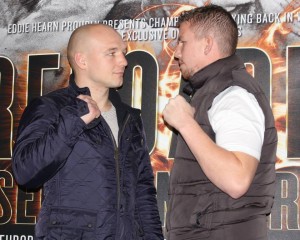 eliminator would put Rees back in the mix among the top British lightweights. A loss would more than likely kill his status as a serious contender.

Rees (37-3-1, 18 KO’s) who had a short reign as WBA light welterweight champ in 2008, had a rough year in 2013. A fifth round stoppage loss to Adrien Broner was followed by a close majority decision loss to Anthony Crolla four months later, setting back a career he had worked so hard to build since losing to Andriy Kotlenik in 2008. “It’s all on the line for me, if I lose it’s curtains” Rees told BBC Sport. “2013 was the worst of my career. Two fights, two losses and some injuries, things can only get better this year. I want to start off with a good win against Gary, who is a really talented fighter that likes to come forward just like I do, so it promises to be a really good fight for the fans.”

Like “The Rock”, Buckland’s been in against some of the top British talent. He’s held regional titles in the super-featherweight, lightweight, and light welterweight divisions and will be looking for much need victory after suffering a one-punch fifth round knockout loss to Stephen Smith last August that cost him his BBBofC British super-featherweight title.

Both fighters have competed in, and won the U.K.’s Prizefighter tournament; Rees as a light welterweight in 2009 and Buckland in 2010 as a super-featherweight. Given the styles of both fighters and what’s at stake, it looks to be an entertaining match up.

In the featherweight division, Lee Selby (17-1, 6 KO’s) meets Rendall Munroe (27-3-1, 11 KO’s) in a scheduled 12 round co-feature attraction with the vacant EBU (European) featherweight title on the line. Selby will also be defending his BBBofC British featherweight title. Selby hasn’t lost since 2009, winning 13 straight contests and snatching a number of regional titles including the BBBofC British, Commonwealth (British Empire), BBBofC Welsh Area, BBBofC Celtic, and WBC International featherweight belts. A win over Munroe would give him possession of four title belts.

Munroe has held the BBBofC and EBU super-bantamweight titles, but was unsuccessful in three attempts at world championships when he was beaten by Toshiaki Nishioka in 2010 for the WBC super-bantamweight strap and in 2012 when he fought Scott Quigg twice for the interim WBA World super bantamweight title; the first match up ended in a draw but Munroe was stopped in six rounds in the rematch. He’s since won three contests, including an English super-featherweight title eliminator, though the bouts were against less experienced opposition.

Olympic gold medalist, heavyweight Anthony Joshua (3-0, 3 KO’s) continues his professional development on the under card. He meets Dorian Darch (7-2, 1 KO’s) in a scheduled six round contest.