If boxing’s  heavyweight division was, as this writer has contended, underrated in the value it provided in 2011 and 2012, there’s no getting around the fact that in 2013 it did kind of suck.

When even Klitschko fans can’t really defend an aesthetic disaster like the world champion Wladimir ‘s Povetkin fight, you know times are 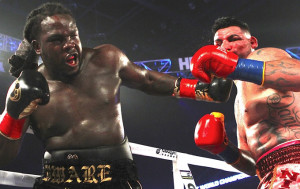 tough.  Actually, even the world heavyweight champion himself admitted he needed to look better next time out (though Povetkin certainly was not blameless in the matter, either).

But hey, a win’s a win, and Wlad just keeps doing just that, racking them those Ws: his record now stands at an impressive 61-3-0, with 51 KOs.

Just about the most exciting heavyweight fighter in 2013 was American veteran Tony Thompson, a two-time Wladimir loser who twice defeated supposed “British successor to the Klitschkos, ” 6′ 8″ giant David Price of Liverpool, not once, but twice, occasioning wholesale changes in the Price camp (including the ditching of former Lennox Lewis promoter Frank Maloney and signing with Germany’s Sauerland Event).

2014 is shaping up to be a much better year for the big boys, thankfully.  For one thing, WBC champion Vitali Klitschko is too busy with the increasingly anarchic political situation in Ukraine to defend his belt, which he has relinquished to again become an “emeritus” champion (meaning he may yet fight again — hello David Haye).

This means a giant world title vacancy that has to be filled, and thus a rematch of one of the best heavyweight tilts from last year, Haitian-Canadian Bermane “B-Ware” Stiverne versus Mexican-American Cristobal “The Nightmare” Arreola (who Vitali prophesied would someday be a champion), will be for the WBC strap.

The pair’s long-delayed first meeting in April was intense affair, with Stiverne mostly controlling the action from the outset and busting Arreola’s snout.  Arreola, gutsy as usual (pun not intended), hung in, but Stiverne won a well-deserved, wide unaninmous decision.

As has long been the story of his career, Arreola had not trained properly for the Stiverne fight, so his trainer, Henry Ramirez, made him a virtual prisoner in a desert gym for his next bout, a comeback against fading American hype job Seth Mitchell.  The fight lasted not a round before a ferocious Arreola’s hand was raised in victory.

Arreola and Ramirez wisely intend to employ the same isolation that made the fighter concentrate for Mitchell as he goes for the WBC world title belt in a rematch with Stiverne this spring.  And that means that this rock ’em, sock ’em tilt could be even better than the first one.

Meanwhile, last year’s surprise star, American veteran  Tony Thompson, 42 (38-4, 26 KOs), a southpaw who took on top-ranked Bulgarian Kubrat Pulev in Germany perhaps a little too soon after his two big wins over David Price, fading late in a UD loss, will also look to bounce back against one of the more disappointing heavyweights of the last few years, the highly over-hyped Odlanier “La Sombra” Solis, on March 22 in Kusadasi, Turkey.

Solis (20-1, 13 KOs) , usually overweight and often lacking in motivation (he has said he doesn’t follow or even like the sport and only does it for money) had better get in shape and quickly find some inspiration, because the aging Thompson proved last year that taking him lightly is a big mistake.  But Solis’s total lack of dedication to his craft is almost equal in intensity to the belief his shrinking fan base, inexplicably, still have in him.

The WBC has also announced that up and coming knockout artist Deontay Wilder (30 KOs in 30 fights) will take on fellow American Malik Scott (36-1, 13 KOs), the contest for the number one mandatory position for a shot at the WBC belt (more info on that fight can be found here).

The other fight for a mandatory matchup with the winner of Arreola vs Stiverne will include Cuban Irishman Mike Perez (20-0-1, 12 KOs) taking on Bryant “Bye Bye” Jennings (18-0, 10 KOs) of Philadelphia for the WBC’s second mandatory position.

A haunted looking Perez seemed to be carrying the weight of injured opponent Magomed Abdusalamov around in his latest lackluster draw with Carlos Takam, while Jennings looked much improved recently in a late stoppage of Polish brawler Artur “The Pin” Szpilka, who was handed his first professional loss by the Philadelphian.