He’s got a bronze medal from the Olympics, and he’s got 30 knockouts in his 30 professional boxing matches to date.

What he doesn’t have a lot of, so far, is respect. 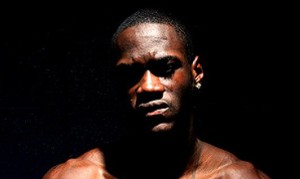 “Caddies, cabbies, ex-basketball players and bartenders” are often some of the terms used to describe the quality of rising, 6′ 7″ American heavyweight Deontay Wilder’s opposition (and indeed, his last victim, Nicolai Firtha, does indeed traverse the links as a caddie, while another Wilder KO win was over failed basketball player Kelvin Price).

So far, former WBO world heavyweight champion Sergei Liakhovich is the biggest name on Wilder’s resume, but the man Wilder beat was a mere shell of his old self, seemingly done after taking a vicious beating from pre-injury heavyweight contender Robert Helenius.

And of course, Wilder, 28, also beat up on the UK’s perennial punching bag, addled ex-Olympian Audley Harrison, who refuses to retire, though most think it would be a great idea.

2014, then, is the year that Deontay Wilder simply must increase the viability of his opposition, or risk being laughed out of the sport.

To that end, The Bronze Bomber will begin the job by taking on the talented but power-challenged American veteran Malik Scott (36-1-1, 13 KOs) on March 15 in Puerto Rico.

Scott, 33, was recently handed the first loss of his career by Britain’s eccentric heavyweight Dereck “Del Boy” Chisora, who was fighting at home in the UK and benefited from a typical “quick count” by notorious referee Phil Edwards (the man who also bailed out homeboy Tyson Fury in a similar fashion when the giant was in big trouble against Canadian heavyweight champion Neven Pajkic, who after the bogus stoppage came close to attacking Edwards).

As for Scott, after being mildly stunned by a Chisora punch that made him take a knee, he appeared ready and able to continue, but Edwards quick-counted him and waved off the fight, giving “Del Boy” the controversial win.

There is no question that Scott possesses boxing skills that Wilder hasn’t had to deal with very often, if ever, as a professional.  Not always the most crowd-pleasing fighter, Scott is nevertheless slick and wily, often sticking to the edges of the ring, gliding and hiding in the ropes, content to counter-punch his frustrated opponents.

Scott’s evasive style is the kind that can rub not only boxers, but boxing judges, the wrong way, and therefore there is often controversy at the end of his fights.

This happened after a televised bout against rising Ukrainian Vyacheslav Glazkov in 2013 which ended in a draw.  Veteran judge Julie Lederman was unable to give the bout to either man, scoring it 95-95, as her two peers disagreed on the winner.  Glazkov was left to press the attack for the entire bout, and Scott’s distaste for direct engagement didn’t impress the powers that be enough to get him a win.  Well, except for biased TV analyst BJ Flores, who made Scott sound like the next Muhammad Ali all night long.

Glazkov doesn’t possess Wilder’s undeniable explosive power, so the game plan for the latter man against Malik Scott should be simple enough.  Cut off the ring and make the smaller man fight, because one big right hand landed by Wilder and the fight could be over.  Allowing Scott to hide in the weeds and occasionally emerge to land his potent jab, utilizing his footwork and counterpunching skills to escape danger, could expose flaws so far not often seen in Wilder’s previous matches and lead to another “controversial” decision.

Interestingly, Glazkov, 29, is slated to take on veteran Polish warrior Tomasz Adamek, 37, on the same date in Bethlehem, Pennsylvania, in a crossroads fight for both men.  Should Adamek lose, his tenuous status near the top of the heavyweight division will take a heavy hit, and Glazkov will move up quickly to fill the vacuum.

Malik Scott, meanwhile, tried to assuage his loss to Chisora by beating 7-12-1 heavyweight Grover Young last week, winning via a 2nd round TKO that didn’t accomplish a whole lot except to get Scott back to his winning ways and perhaps soothe his injured boxing psyche.

But with Bryant “Bye-Bye” Jennings looking very good in taking out young Polish prospect Artur Szpilka last week, the spotlight for next “American Heavyweight Savior” now turns to Wilder.  A quick KO disposal of a skilled heavyweight like the elusive Scott should put Jennings and Wilder on a path ultimately leading toward each other.