Last week, ESPN and Banner Promotions announced it had joined forces to create the 2014 Boxcino Tournament; where lightweight and middleweight contenders will compete in separate single-elimination brackets beginning February 21. The field is a diverse mix of prospects and veterans from various parts of the world. One of the middleweight’s taking part is Sena Agbeko (15-0, 15 KOs) of Ghana; who makes his U.S. debut against Raymond Gatica (13-2, 8 KOs) in a six round bout. 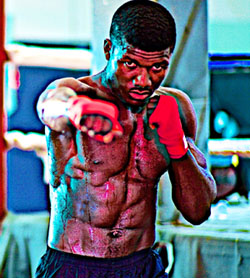 Agbeko became interested in boxing while following the career of Azumah Nelson, who many consider to be the greatest African fighter of all time. In 2008, he began to box and has rarely left the gym since. Now, at 21-years-old, he hopes to win the Boxcino title and join the likes of Ike Quartey, Joshua Clottey and Joseph Agbeko, as the latest champion to come out of Ghana.

“People are looking to me to be the next big thing to come out of the country,” said Agbeko. “There’s a lot of expectations and pressure on my shoulders. But it’s a good thing, because they inspire me to train hard.”

Although he boasts the record with the highest Knockout percentage of the tournament, he has yet to fight outside of Ghana, or face the level of competition the tourney will provide. Still, don’t look for Agbeko to be intimidated by his opponent’s edge in experience.

“I’m going to win the tournament,” said Agbeko. “I believe 100 percent that I could beat the rest of the seven guys in the bracket if I had too; because I’m the hardest working guy in this tournament.”

Now that he’s ready to take the next step in his young career, his representatives at KO Management have moved him to Tennessee; where he trains, away from the distractions that exist at home. It took time for him to get used to the climate change (average temperature in Ghana is about 85 degrees), but now that he’s settled, he plans to stay in the U.S.

“Tennessee is peaceful and there are no distractions,” Agbeko said. “My future is here in the U.S., because there’s so much I want to accomplish and going back to Ghana wouldn’t exactly give me the chance to do that.“

Last year, Agbeko graduated from The Ghana School of Journalism, making him the first Ghanaian boxer to ever complete tertiary education (college). He wants to one day pursue a career in broadcasting.

“That’s what I’ve always been interested in doing, that’s where my passion has always been. Hopefully when I retire I can work in broadcasting,” said the undefeated middleweight.

It’s been 30 years since Azumah Nelson put “The Gold Coast” on the map by knocking out Wilfredo Gomez. Since then, Ghana has produced solid fighters, but none of whom have captured the public’s attention the way Nelson once did.

On February 28, in Hammond, Indiana, Agbeko begins his run at glory; with the hope of creating a new path for African boxers and earning the worlds respect.

“A lot of times fighters coming from Africa haven’t been given much respect,” said Agbeko. “I have the chance to change that and create a new era for African guys like me. I want to be the one in recent times to bring about the respect for African fighters like Azumah Nelson accomplished in the past.”