Denis Grachev (13-2-1, 8 KOs) will take on Isaac Chilemba (21-2-2, 9 KOs) in the 10 round co-feature of the Main Events promoted “Crossroads” card on March 15. The Sands Casino Resort in Bethlehem, Pennsylvania will play host to the bout, along with the night’s showcase between Tomasz Adamek (49-2, 29 KOs) and Vyacheslav 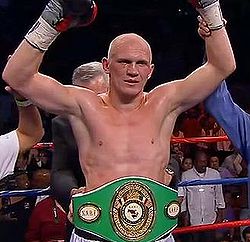 After beginning his career with 12 wins and no defeats, Grachev has dropped two of his last three, including a loss to the tough Edwin Rodriguez in the finals of the “Monte Carlo Million Dollar Super Four”.

Chilemba is an experienced veteran who’s faced notable names like Thomas Oosthuizen, Tony Bellew and Edison Miranda. After losing to Bellew last May, Chilemba bounced back by defeating Michael Gbenga by unanimous decision in November.

With a win, both fighters could see themselves back in the mix in a stacked light heavyweight division.