It was a successful enough, if not particularly exciting, afternoon for top UK heavyweights today as both Hughie Fury and his cousin Tyson emerged with fairly easy wins, while Dereck “Del Boy” Chisora dominated a laconic, disinterested Kevin Johnson for twelve rounds to chalk up another victory for the UK side of the division. 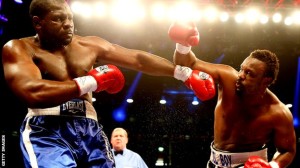 In a card held at the Copper Box arena, Hughie Fury, still only 19 years old, showed marked improvement in a very technically sound win over journeyman Matt Greer of the United States.  Fury was a picture of composure as he hit Greet with stinging body shots that left the American wilted by round two, his corner throwing in the towel only to be ignored as the referee, who nevertheless counted out the American at 2:37 of the second round.

“I like to use me boxing skills,” Hughie Fury said following the fight.

“It’s not just about rushing for the knockout,  I like to pick me shots,” said Fury, trained by his father Peter, who also handles cousin Tyson and American veteran Eddie Chambers, who was on hand as an analyst for Frank Warren’s Boxation network.

As for Hughie’s cousin Tyson, for whom boxing seems a more on-again, off-again passion, his surprise career-high weight of 274 pounds didn’t seem to hinder him too much against hard-hitting but limited former American football player Joey Abell.

The fight was a sloppy affair, with Fury getting caught hard with some Abell punches, one of which left a mouse under his right eye.  Fury used his long jab to good effect, but just as Abell seemed to be gathering momentum at the start of round three, he took a late and very low shot from Fury that hurt him and stalled his momentum.  No points were deducted, however, by the referee.  Abell was then knocked down by Fury, as both fighters exchanged big shots at the end of the round, and it seemed the American’s night was just about over.

Fury (22-0, 16 KOs) also came very close to hitting Abell while the latter was on the floor after a knockdown in the next (and what turned out to be last) round, and seemed to be in no mood for sportsmanship during the entire night after what he called a “nightmare week” that saw his wife hospitalized, his cars vandalized, and his enemy David Haye (who cancelled twice on him for a UK mega-fight, costing Fury considerable financial losses) constantly in the press talking about a comeback.

After disposing of Abell, Fury called out world champion Wladimir Klitschko, labeling him a “pussy” after the fight for supposedly avoiding Fury, perhaps forgetting that he had a chance to reach Klitschko by defeating top Bulgarian challenger Kubrat Pulev–who beat Abell in a far more stylistic fashion a few weeks back—in an eliminator.

Fury chose not to fight Pulev, saying the fight didn’t pay enough money, after telling the world for the last few years that he is a man from a “fighting culture” (Irish Travellers) who doesn’t fight for money.

Chisora (20-4-0, 13 KOs) did his best to press the reticent American into a fight, and provided the biggest moment of the evening by dropping the cagey, negative pugilist hard in the fifth round.  Alas, Chisora was unable to close the show.

Johnson had a few good scoring moments as Chisora began to tire of pressing the fight, but these were too few and far between to do him much good with the judges.

The verdict when the score was read–118-109 (twice) and 118-110 for Chisora–proved once again the reluctance of judges to reward elusive and negative fighting styles like Johnson’s.  This writer likewise scored the bout 117-111 for Chisora.

After his win, “Del Boy” said he’d like to take on former WBA “regular” champion Alexander Povetkin in Russia this April, and then stage a rematch with Fury–to whom he lost his British and Commonwealth titles to in 2011–this summer.