When Ukrainian middleweight Vitalii Kopylenko (22-0, 12 KOs) takes the ring February 28 in Hammond, Indiana, he’ll do so knowing that his fight with Cerresso Fort (17-2-1, 11 KOs) will pale in comparison to the ongoing conflict in his homeland. At the forefront of the civil unrest is fellow boxer and heavyweight champ Vitali 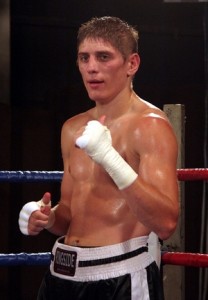 Klitschko, whose UDAR party is among the groups seeking a position within the Ukrainian government.

Although the problems in his country are important to Kopylenko; he hopes his participation in the 2014 Boxcino tournament gives his people a pleasant distraction.

“I think that what we can do in the ring can give confidence to my people in my country,” said Kopylenko.

The 30-year-old has the best record in the 160-pound bracket and his younger opponent, Fort, is coming off a loss to Caleb Truax in September. But, Kopylenko doesn’t believe a fight is won on paper.

“It’s all about what will happen in the ring,” Kopylenko said.

Like fellow tournament competitor Sena Agbeko, Kopylenko, will be making his U.S. debut in the first round of Boxcino; where he hopes to earn the respect of fight fans throughout the globe.

“I’m very excited, I have been waiting for this for a long time and I can’t wait to prove myself in the world arena of boxing,” said Kopylenko.