Here we are, for another installment of my weekly series, where I shall randomly pick a boxing movie from the Netflix Streaming library and let you know if it’s worth watching. As I have feared, there seems to be more junk than substance in the queue, but I won’t let it stop me. 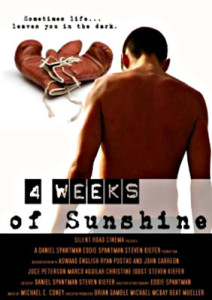 This week, let’s see if 4 Weeks of Sunshine is a hidden, independent gem…

I don’t even know where to begin with this movie. I suppose a quick summary is usually the starting place, but I’m still reeling. The Netflix synopsis reads like this:

“After being blinded in a tragic car accident, champion boxer Jeremiah is having trouble accepting that he can’t fight anymore. When he regains his sight, Jeremiah discovers the world is an even darker place than when he was blind.”

This summary is misleading. First off, Jeremiah wasn’t a champion boxer. From what I can tell from his living conditions, he never made good money from boxing. He lives with his mom and his brother in what appears to be a duplex. Sure, he could have spent his money poorly like 90% of all boxers, but I doubt the filmmakers put that much thought into it.

Also, the “tragic car accident” isn’t really tragic. Jeremiah is doing that HILARIOUS trick where your friend tries to get into the car and you keep moving it and he literally does this to his mother and brother over the length of the ENTIRE DRIVEWAY until his car has just pulled clear out into the middle of the street so you do not hurt the cars ceramic coating. There’s nothing tragic about that, he was being a dumbass. The only tragic thing is that his mom and brother didn’t get to go to wherever they were headed.

And finally, when he regains his sight, all he sees are people trying to make ends meet since his family is trying to take care of him and money is tight. I don’t know why a “champion boxer” wouldn’t be aware of some of the seedier things that go on in this world. Jeremiah should stop being so surprised.

4 Weeks of Sunshine is some student film shit.

4 Weeks of Sunshine is what you get when a Brooks Institute student sees that there’s a cool looking boxing gym down the street and then they try to make up a story that gives them an excuse to shoot there.

Why do I say this? Well, because I went to Brooks Institute and I also trained at the gym featured so prominently in about four scenes in the movie (sadly Sylva’s Boxing Gym is no more, and the warehouse it was in is now an empty lot).

4 Weeks of Sunshine is a checklist of student film tropes that make experienced moviegoers roll their eyes. Opening shot: alarm clock goes off and a hand pats the top of the nightstand searching for the “off” button. Let me ask you, when have you ever actually done that? Seriously? Because after only a few days of hearing an alarm clock, I swear to you, I’m able to locate that noise and turn it off in an instant. So why does his hand pat around the nightstand looking for the alarm clock? Well, because there’s a director somewhere going “you’re tired and you want the alarm clock off, but you can’t find it…”

Jeremiah has supposedly been blind for some time now but he walks like he just finished his first cattle drive (it doesn’t help that he insists on leaving his white cane at home) shuffling along with his hands flailing around him. Oh, and because he’s blind, he always wears sunglasses, and if you catch him without sunglasses, he’s got his eyes shut, because I guess that’s what blind people do.

Anyway, Jeremiah has been meeting up with some old guy named Mike in the park who has been helping him look for a gym to train at. In this world (Ventura), apparently a boxing gym is not a place you just go to train to get fit. Nope, in 4 Weeks of Sunshine, if you go to the gym, you’re joining their stable of fighters and you will be expected to fight professionally.

Jeremiah’s mom and brother hire Veronica… a nurse or something? She’s supposed to take care of Jeremiah and also become a love interest. This is a particularly amazing aspect of the movie since Veronica seems to fall in love with Jeremiah, whose main personality trait is being a prick about being blind. In fact, when Veronica first shows up, she introduces herself to the mom, and then after the mom leaves, she introduces herself directly to Jeremiah, and Jeremiah says “I’m blind, not deaf.” Being the smooth operator he is, he then follows with “Now I don’t think I have to introduce myself, now do I?”

That’s our hero, ladies and gentlemen.

Now, since this is a boxing site, let me talk about the boxing. Jeremiah tells Veronica that he likes to box because “boxing is simple: you have an enemy, you fight him.” Hell, it’s that easy isn’t it?

Some gym owner in the movie lets Jeremiah pound on some heavy bags as a favor to his brother and Jeremiah decides to do some sparring with a meathead between the ropes. Jeremiah lands a lucky punch and knocks the guy out clean and the gym owner says to the brother that he knows a way that they can make some money. They actually plan on putting a blind man into a professional boxing ring on the off chance that he can land a lucky punch and knock somebody out and his brother is completely on board with it. We even get a long sequence where his brother has concocted a number system that he can call out to Jeremiah so he knows where his opponent is. This number system is never used because Jeremiah bonks his head on a table and his eyesight comes back.

This is where the movie moves from great to legendary.

Jeremiah decides that it would be cool to continue pretending to be blind so that his family can continue paying Veronica to hang out with him (they have amazing chemistry in that she likes him for no reason whatsoever). Then, Jeremiah loses his fight. If I thought the fights in The Opponent were bad, well, then I was mistaken, because these fights are the worst boxing I’ve seen in a movie. I don’t think Jeremiah threw five punches, instead, he ducks and dodges and weaves around the ring, because that’s what a blind person does–oh, I mean a normal person pretending to be blind in order to hang out with the girl his family pays. Anyway, Jeremiah loses. This is our “champion boxer” from the summary, and the end of any boxing in the movie.

Under the guise of a fake blind man, Jeremiah finds out that his brother has been selling drugs and his mom works as a prostitute. They both still love Jeremiah, that much is clear, but obviously there are some financial hardships when you have to care for someone who needs round the clock attention apparently. Jeremiah flips his shit when he finds this stuff out and nobody seems to call him out on how he’s NOT ACTUALLY BLIND and still refuses to work and would let his family continue paying for his caretaker.

Also, Jeremiah sleeps with some black lady who is only in the story so that he can sleep with her. She literally has about five lines, and three of them are only there so that Veronica can hear her through the telephone. Veronica rightly gets mad at Jeremiah and refuses to see him, so Jeremiah, in a romantic gesture for the ages, kicks her door in and strikes her so hard she falls to the ground and then says that she has no right to leave him since he was the one who pretended to be blind to his family so that he could be with her.

Let me repeat that:

Jeremiah, the guy who lied about being blind to his family and has just been caught sleeping with a random woman, has kicked in his ex-girlfriend’s door, hit her, and then tells her that she has no right to leave him since he was nice enough to fake being blind to his family (a family that has resorted to selling drugs and prostitution in order to pay for his care) so that he and Veronica can be together.

I don’t know if Veronica heard any of his monologue, though, because I’m pretty sure after he hit her, she’s unconscious for the rest of the scene.

This is the worst movie I have seen in a long, long time, and this comes from someone who regularly watches The Room.

Normally I try to give some sort of background on a movie, talk about a director or something, but this movie doesn’t even have an IMDB page that I can find. I don’t know how that is possible.

This movie is shot on film, but it looks like it’s shot on a mini-DV camera. Seriously, I thought my resolution was low or something. Every shot looks out of focus and the cinematography is atrocious.

If you do actually decide to watch this, stay in your seat through the credits so you can hear the miserable “4 Weeks of Sunshine” song as performed by your loser friends who think they’re Linkin’ Park.

I think the guy who plays Jeremiah is also the director for this movie so that should tell us something.

Anyway, join me next week as I watch Knuckle, a documentary about Irish families and their bare-knuckle boxing feuds.

And as always, feel free to hit me up on twitter @OgYokYok to discuss boxing, movies, and boxing movies.