Fifty years ago today, Muhammad Ali defeated Sonny Liston for the World Heavyweight championship and almost over night, changed the whole fabric of the boxing game. No one had ever seen any…thing quite like Cassius Clay, as he was known then. He was brash and arrogant in a manner akin only to the legendary Jack Johnson, the first coloured heavyweight champion of the world, who reigned from 1908 to 1915. Johnson was somehow lucky enough to avoid assassination along the way, despite the depth of animosity felt towards him by white America. 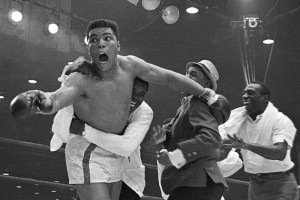 Cassius Clay was no Joe Louis, who was quiet and thoughtful verbally, careful not to antagonize or put a foot wrong in public. Clay never stopped talking. Unlike Johnson, Cassius had the gift of making people laugh. He was able to launch into a diatribe of what he would do to his next opponent and in what round, and yet, say it with a twinkle in his eye and a smile not far from his face. Then there was the poetry, delivered with a deadpan solemnity, which would have done many a comedian proud.

“The Louisville Lip” could walk the tightrope between outrageous arrogance and ridiculous clowning, while making people both laugh and admire him at the same time. Perhaps most important of all, was that as his professional career progressed this lippy young man showed that he could walk-the-walk along with all of his talk.

Sonny Liston was different and the general opinion within the boxing world was that the former convict, now World Heavyweight Champion, was invincible. While views on Liston ranged from, a kind of righteous repugnance to outright awe, all agreed that the hulking champion was a human wrecking machine who would reign as World Heavyweight Champion for a long time. Clay’s own management didn’t believe he could win and only agreed to let him go ahead with the fight at his continued insistence. Cassius had been floored in previous fights by Sonny Banks and Henry Cooper, so the general consensus was how could he possibly survive the bombs delivered by Sonny’s huge hands? The same bombs that had blitzed Floyd Patterson twice in the one round!

On fight night, when the forty-six attending sportswriters were polled on whom they picked to win, forty-three picked Sonny. Considering the atmosphere surrounding the match, perhaps the surprise should be that three writers actually picked Cassius to win.

Clay had tried to get inside the champions head in the run up to their match, constantly taunting and ridiculing Sonny in the manner which would become Muhammad Ali’s trademark in later years. It was good publicity, but Clay also felt it was good psychology. Clay knew that Liston wasn’t afraid of him, but believed he might be afraid of ‘a nut’. At the medical and weigh-in for the fight, with just hours to go before their clash, Clay worked himself into a frenzy. His blood pressure when taken was 200 over 100 and his heart rate was 120 per minute. The doctor examining him declared that the young man was ‘scared to death’. Years later Ali would say that the scene was just another part of his act and a ploy to make Liston believe that he was going into the ring with the most unpredictable of opponents…a crazy man.

When the two men stepped into the ring that night on February 25, 1964 at the Miami Convention Centre, both seemed to be calm and Liston had his normal baleful expressionless look upon his face. Perhaps after a life often walked upon the dark side it would take more than Clay’s comical histrionics to shake Sonny from his solemn belief that he was about to give this upstart the beating of his life.

Over the years many have gained the mistaken belief that Sonny Liston was a lumbering muscle bound plodder of a fighter, with great power but little speed or technique. A fighter who was rendered ridiculous on the night he lost his title to Cassius Clay. The truth is that Liston was a smooth and fluid mover in the ring and had remarkable hand speed for a fighter of his size and build. He also had one of the best and most powerful jabs ever seen in the division’s history. Sonny’s jab was swift and accurate, and numbing. It was these attributes, allied with his innate strength and power that helped make Liston such a formidable and frightening destroyer in the ring. On this night however, Liston was facing a man with freakish speed for a heavyweight. Cassius was akin to being a 210 pound Sugar Ray Robinson. Furthermore, in addition to his speed, Liston would find that Cassius could also match him for strength.

The fight started with Clay retreating and Liston coming forward, trying to land his jabs and follow up rights. Not only did Cassius avoid the punches, but he peppered back jabs and the occasional right to make Liston sure that he was in a fight. Clay ended the 1st round with a flurry and the crowd roared and stood on their feet as they realised that the lippy clown wasn’t about to be blown away in a round as many had believed.

In the 2nd round, Clay continued to evade Liston, as the champion came forward trying to tag the challenger with his bombs. Clay leaned back, moved left and right, and spun off the ropes on the few times he was cornered. To add insult to injury, Clay replied with his own lightning jabs and right hands, that penetrated through the pursuing champions defences and cut Liston high on the left cheekbone.

In the 3rd round Clay started to stand his ground and put more weight in his flurries. Liston was not just being out-boxed now, but out-punched as well. A ripple now began within the crowd, most of who were on their feet; a sense that something truly extraordinary was happening before their eyes.

In the 4th round more drama entered the contest as Clay became more cautious and was content to retreat and land the occasional jab. Between the 4th and 5th rounds, Clay complained of something having gone into his eyes and that he could not see. When the 5th began, as if aware of his challenger’s distress, Liston literally threw himself on the attack at the nimble taunter in front of him. Even with little vision, Cassius managed to still evade Liston’s attacks and by the round end, with his vision clearing, had started to fire his jab out into Sonny’s face once more. Cassius took control again in the 6th round, standing flat-footed now, as he unleashed his jabs and combinations, which were visibly hurting the champion. Liston was cut further in this round and at the end trudged back to his corner with the air of a beaten man. Despite this, it was still a huge shock for everyone present, when Sonny quit on his stool before the start of the 7th round. Everyone that is, except Liston and Clay.

Cassius Clay proved that night that he was no joke or fraud and gave us the first glimpse of the greatness to come. He was to be an extraordinary champion who would achieve some of his greatest victories when he was already losing the fantastic speed and reflexes that helped him defeat the ‘invincible’ Sonny Liston. That night he told us he was great and for the first time, we began to listen.