3/14 – Michael Katsidis (28-6, 23 KO’s) vs. Eddy Comaro (27-17-5, 11 KO’s) – Rumours International, Toowoomba, Queensland, Australia
The former WBO lightweight champion returns after two years away from the ring and headlines the card in a schedules 10 rounder. Katsidis retired in 2012 after losing his last two bouts, and four of his last five. Still a lightweight at 33 years old, he faces journeyman Comaro, whose career’s been based in Indonesia and Thailand. 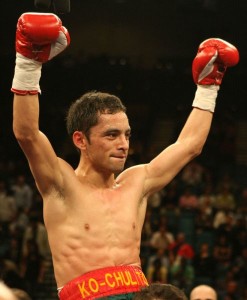 Former world champs meet in a scheduled 10 rounder. Montiel had a long run as a WBO title holder in the flyweight, super flyweight, and bantamweight divisions and also held the WBC bantamweight title for a short period of time. He comes in on a four fights winning streak against mediocre opposition. Cruz has been a pro for over 20 years. He doesn’t have the world championship credentials that Montiel has, but he has held both the IBO and IBF featherweight titles. He’s had a tendency to go on a winning streak, then lose a bunch, and then win a few more. Lately he’s been on the losing end, dropping three of his last four bouts and being stopped in two of those.

3/15 – Andrzej Wawrzyk (28-1, 14 KO’s) vs. Frans Botha (48-10-3, 29 KO’s) – Hotel Arlamow, Arlamow, Poland
The “white buffalo” is still at it. The former WBF heavyweight champ has been around a long time, and has been in the ring with a lot of big names, though he’s been beaten every time he faces top level opponents. With his best days long gone, the 45 year old comes in on a five fight losing streak as an opponent for Polish prospect Wawrzyk, who’s beaten a list of solid B and C level opponents, most recently stopping Danny Williams in one round. His one loss was a third round stoppage by Alexander Povetkin last year.

3/15 – Rakhim Chakhkiev (17-1, 13 KO’s) vs. Juho Haapoja (20-4-1, 13 KO’s) – Dynamo Palace of Sports in Krylatskoye, Moscow, Russia
The rebuilding phase continues for the Russian cruiserweight prospect. Since his knockout loss to Krzysztof Wlodarczyk last year, Chakhkiev has fought once, scoring a 10th round stoppage of Giulian Ilie. With the vacant WBC Silver cruiserweight title up for grabs, he faces former EBU cruiserweight title holder Haapoja, who’s fought outside his home of Finland three times, and lost on all three occasions.

3/15 – Moruti Mthalane (29-2, 20 KO’s) vs. Jether Oliva (10-1-2, 10 KO’s) – Durban International Convention Centre, Durban, KwaZulu-Natal, South Africa
Mthalane returns after an 18 month layoff to a world title shot. The former IBF flyweight champion takes on the former WBO Oriental minimum-weight title holder for the vacant IBO flyweight championship. Oliva lost in only other bid for a world title in 2011 when he was beaten comfortably by Ulises Solis in 2011, he’s gone 3-0-1 since then.

3/15 – Tony Bellew (20-2-1, 12 KO’s) vs Valery Brudov (41-4, 28 KO’s) – Echo Arena, Liverpool, Merseyside, United Kingdom
Following his knockout loss to Adonis Stevenson in November, Bellew gets a shot at the vacant WBO International cruiserweight title. If he wins, it will be his fifth regional title in the division; he’s held the Commonwealth, BBBofC, WBC International Silver, and WBC Silver titles, the last of which he still holds. In 2006, Brudov had a short reign as the interim WBA World cruiserweight champion. He’s lost in three other world title attempts.

3/15 – Rocky Fielding (17-0, 10 KO’s) vs. Charles Adamu (21-5, 15 KO’s) – Echo Arena, Liverpool, Merseyside, United Kingdom
Fielding puts his Commonwealth super middleweight title on the line against former title holder Adamu. He’s scored first round stoppage wins in his last two bouts, and only one of his last eight bouts have went the distance. Since suffering a TKO loss to George Groves four years ago, Adamu took off three years before coming back to win four straight.