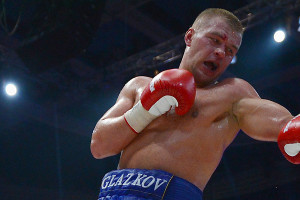 throughout the Sands Casino Events Center; with the red and white the dominant color of the evening.

Glazkov controlled the first, peppering Adamek with his jab and effectively slipping the two-time champion’s punches. Glazkov continued to land his jab in the second and began throw a right hand behind it, which stunned Adamek. The crowd tried to will Adamek on at the start of the third, but the younger Glazkov had an answer for everything the Polish legend had. As he rose from his stool to start the fourth, the right eye of Adamek was nearly shut and by the time the round was over he had a bloody nose. Adamek had some success in round five, but as the frame came to a close, his mouth piece was knocked out by a huge left hook. A game Adamek fought gallantly in both rounds seven and eight. In round nine Glazkov dominated; every jab he landed violently knocked Adamek back a few steps. Glazkov controlled rounds 10 and 11, and out slugged Adamek, who went out swinging in the final round; even knocking out the Ukrainian’s mouth piece. All three judges agreed that Glazkov won the fight and scored it 117-110, 117-111 and 116-112 respectively.

The co-feature of the night between 175 pounders Isaac Chilemba and Denis Grachev proved to be “light” in pretty and “heavy” in leather. Both fighters showcased their jabs in round one and didn’t land anything of substance until the second; where they each exchanged power shots and fought well in the clinch. In the third, the South African began to bounce lead right’s off of Grachev’s forehead and catch him with uppercuts as the Russian lunged in. In an attempt to get inside, Grachev began to leap in with his punches in the fourth, but Chilemba mostly had an answer for his aggression. A cut formed around the left eye of Grachev in the fifth and by the sixth, his white shorts began to turn pink. Just as it appeared as if Grachev was slowing down, he turned things around with a huge left hook at the end of the eighth; which sparked a furious exchange to close out the round. Grachev continued that momentum into the ninth and pressed Chilemba throughout, but Chilemba closed the show with an effective tenth by out working the hard charging Grachev. All three judges scored the bout for Chilemba, 100-90, 99-91 and 99-91.