Hola friends and family, welcome to Kerplackastan’s highest rated (non-militant) weekly boxing exercise, The Sunday Brunch – We are to RPG wielding terrorists what Dan Rafael is to unlimited Golden Boy-sponsored steak dinners. We’re going to try to not fall to the canvas unexpectedly when we chop up what happened in Puerto Rico 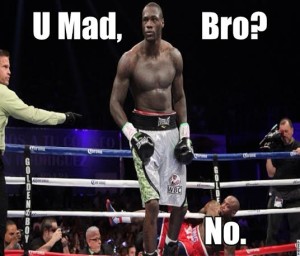 this Saturday at the packed Coliseo Ruben Rodriguez indoor sporting arena. So, erase the adware supplied to your computer by your daily visit to boxingscene, wipe your Cheeto-stained fingers off on your shirt and pull out an extra 25 short-range Taepodong-2 missiles to fire into the Sea of Japan, we’re about to start the show. With that being said, I gave you your instructions in the dressing room, what I say you must obey – Cuidate, escucha me, toca los manos y buena suerte…Let’s get it on!

I’ve long asserted that Deontay “The Bronze Bomber” is the future of the heavyweight division; and he still may be champion in the future. The man is 6’7” and won an Olympic medal, after all (not to mention that he’s an Al Haymon fighter). However, until further notice he will be henceforth known as “The Bronze Breeze” – #BreezeSquad. Allow me to elaborate…

It’s hard to say if his friend, Malik Scott took a dive when the two met in Bayamon, Puerto Rico on Saturday night. Fight fans would be hard pressed to name anyone that Scott has fought outside of Dereck Chisora, however, the same could be said about Wilder’s resume as well.

The consensus among media and fans alike is that the strong breeze generated from the powerful left hook – straight right combination of Wilder caused Malik Scott to lose all of his faculties and collapse unexpectedly half-way through the first round.

Well, almost everyone. In fact, ESPN’s very own Dan Rafael had two very different viewpoints about the “knockout” depending on at which minute you asked him. During the fight Rafael live-Tweeted: “Pathetic. Wilder shot did not come close to landing clean.” However, in his follow-up article some 40 minutes later he was quoted saying “This knockout, however, was not controversial.” Interesting stuff, Dan.  I suppose that is how you keep your meal ticket going when you’re in the big leagues? Either way, someone get this man a hot, buttery Bojangles’ biscuit – STAT.

In the main event of the evening, unified champion, Danny “Swift” Garcia successfully kept his titles safe from being annexed at the hands of a very well-prepared Mauricio “El Maestro” Herrera. Garcia started off fine, mainly looking for a big left hook to end things early for the partisan Puerto Rican crowd in attendance. However, the 33 year-old Herrera would have none of it, instead opting to wisely keep his right glove up to avoid that predictable shot that brought down so many of Danny Garcia’s foes before him.

As the rounds wore on, though, Herrera kept to a disciplined game plan and began to outwork and bloody the 100% Puerto Rican with a consistency that was obviously unexpected from the defending champion. After the bout, Danny Garcia cited weight issues as the cause of his struggling with Herrera.

Garcia weighed in at 139.75 (a quarter ounce under the junior welterweight limit) and chugged a bottle of Pedialyte – a rehydration tonic “for infants and children [that] helps prevent dehydration by replenishing vital minerals lost during diarrhea and vomiting” – immediately after getting off the scale on Friday. Post-fight, Garcia noted that he will likely move up to 147.

Judging solely on looks (Herrera with tan lines on his arms and Garcia quite pale), it’s not impossible to envision a scenario where Danny Garcia had to cut some poundage and was wearing those full body garbage bags that athletes sometimes don so they can make a certain weight limit. Especially so with his father, Angel Garcia saying on Friday that “Danny doesn’t consider it making weight, he’s fasting for God’s blessings” …

I, like many of you, scored the fight for Mauricio Herrera by a couple of rounds. Whether you consider it a robbery or just a bad decision doesn’t affect what actually happened – A man had a fight that 90% of the population considers he won, taken away from him. Unfortunately, such is boxing – our often corrupt, nonsensical sport that is ruled by the almighty dollar. Had Herrera had a bigger punch we may not have had all the social media backlash that has been going on since the fight, but had he had a bigger punch it is extremely likely that he wouldn’t have got the nod to be Danny’s opponent on Saturday night.

Thanks for joining us again this week, family. Dine with us again next Sunday when we discuss more tips, tricks and codes for the Nintendo Entertainment System. Don’t forget to board up your windows and hoard some medical supplies because AMC’s The Walking Dead airs immediately after your Sunday Brunch! Santé!