Bronx native Maureen Shea (23-2, 11 KO’s) had her first bout on American soil in over three and a half years, taking a wide 10 round decision over Nohime Dennisson (5-3-2) at the Performing Arts Center in Oxnard, California, winning the NABA featherweight title. Shea is the former NABF featherweight title holder and the former interim WBC world featherweight champion, and currently ranked sixth by the 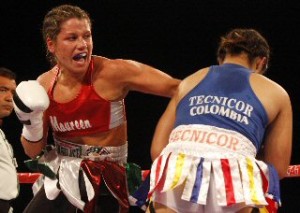 organization. She is also known for her work with “Million Dollar Baby” actress Hillary Swank as well as hosting the Mexican boxing reality show “Todas Contra Mexico” in 2011. Her website advertised the bout as being contested for two interim world titles. Since 2011, Dennisson has fought just once a year, compiling a record 1-2-1. This was her first time going past six rounds.

Undefeated flyweight Joselyn Arroyo Ruiz (16-0, 7 KO’s) kept her streak alive, knocking out Leidis Martinez (4-4, 3 KO’s) in Chiapas, Mexico. It took the NABF flyweight champ just 24 seconds into the second round to end the fight. The title wasn’t at stake.

In Baja California, Mexico, former WBF flyweight champion Irma Sanchez (28-7-1, 8 KO’s) dropped a 10 round decision to lesser experienced Yazmin Ortega (2-2-1, 1 KO). Sanchez, who also held a number of regional titles as well as the IBF light flyweight belt, won the world title in 2011 and made four successful defenses. She is listed by Boxrec.com and Wikipedia as being the current champion, but the official WBF website lists her title as being vacant. Her last defense was in September of 2012. Ortega turned pro a year ago and has now won two consecutive outings after going 0-2-1 in 2013.

In Zambia, Catherine Phiri (8-0, 4 KO’s) won the vacant WBC silver bantamweight title with a third round knockout of Pia Mazelanik (13-6-1, 1 KO). It was Phiri’s third straight stoppage and second consecutive win in a title bout; in September she won the vacant African Boxing Union bantamweight title. Mazelanik, who’s fought just one other time since 2011, has now lost three of her last four contests including a shot at the WBF bantamweight title, which she lost to Renata Szebeledi.

Women’s boxing is set to reach another milestone. For the first time, women’s youth boxers will be competing in the AIBA Youth Olympic Games to be held in Nanjing next month. They will compete in the same three weight divisions as they did in their Olympic debut in 2012: Flyweight (48-51kg), Lightweight (57-60kg) and Middleweight (69-75kg). It was reported through the AIBA website that 100 females have been entered by 47 countries. The event will be held at the Armeec Arena of Sofia in Bulgaria from April 10th-25th.