Filipino minimum-weight Merlito Sabillo (23-0-1, 12 KO’s) will put his undefeated record on the line when he makes the third defense if the WBO minimum-weight title this Saturday against number nine ranked Francisco Rodriguez Jr. (13-2, 9 KO’s). The 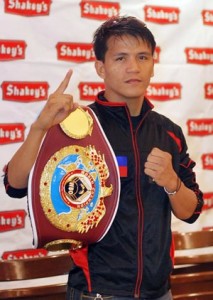 bout will take place in the challenger’s hometown of Monterrey, Nuevo León, Mexico at the Arena Monterrey.

Sabillo, who has also held titles for the Philippines Games & Amusement Board and the OPBF, is expecting a tough fight from Rodriguez. He’s been focusing on his strength and conditioning with Coach Nick Carson, and trainer Edito Villamor said the champion is in great shape. This is the third title defense for Sabillo, originally winning the interim title with an eighth round stoppage of Luis De la Rosa a year ago. He followed up with a ninth round knockout of Jorle Estrada four months later and in November, fought to a 12 round split draw with undefeated Carlos Buitrago.

Rodriguez, at 20 years old, is still considered a prospect in some circles but the Sabillo camp considers him a dangerous opponent and has options in place so there will be a rematch in case Sabillo happens to lose. This is the first opportunity for Rodriguez to win a title. He comes in off back to back wins after suffering a seventh round stoppage loss to Roman Gonzalez last September, the second loss of his career. He’s fought just once outside his home country, that being the Gonzalez loss which took place in Nicaragua.