Last night, Sergey Kovalev (24-0-1, 22koes) defended his WBO world light-heavyweight title against Cedric Agnew (26-1, 13koes) with a controlled and classy performance that takes the Russian born champion a step closer to being the main man at 175 pounds. 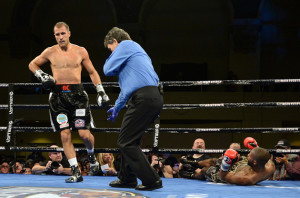 In the build up to this contest, most of the talk concerning the challenger was who exactly was he? Aside from the fact that he is a native of Chicago, (but now based in Texas) and unbeaten as a professional, there was little information to enlighten us, concerning how good, or otherwise, this challenger might be.

By the end of their world title contest, within the atmospheric confines of the Adrian Phillips Ballroom, Boardwalk Hall, Atlantic City, we had learned enough about Agnew to be able to say that this was not simply an unknown being led willingly to the slaughter. Even in defeat, Agnew showed enough ability and heart to prove that behind the anonymity of his career so far up to this point, he was indeed a genuine challenger, and that his pre-fight confidence was not simply a case of whistling in the wind.

Agnew did not win the battle or the title that he obviously so desperately wanted to capture, but he did leave the fight with something worthwhile, an identity. His clever and gutsy effort against perhaps the biggest puncher in boxing today p4p, will now stop people from asking Cedric ‘who?’ and pave the way for his own career to move on in a positive direction, from this defeat.

We also found out quite a bit about the champion Kovalev, in this fight. We learned that he can indeed deal with being handed a little adversity in the ring, such as suffering cuts over both eyes, being hit low, and having to travel into the later rounds of a fight, for a change. Kovalev passed these tests well, adjusting to his opponent’s stubborn cleverness, with what is fast becoming ’The Krushers’ trademark coolness.  The manner, in which the champion kept together his clinical calmness, while slowly dissecting his brave challenger, gave further proof of the depths of Kovalev’s ability.

It is perhaps no surprise that Kovalev is quickly becoming one of boxing’s most feared and avoided world titleholders, next to fellow Eastern European, and WBA world middleweight title holder, Gennedy Golovkin.

The challenger, watched by his parents at ringside, from the 1st round, showed that he was in there to try to win. Both men started off pawing at each other with their jabs, with the champion coming forward with that intelligent aggression that is fast making him such a popular figure for HBO. Agnew, fighting out of his southpaw stance, indicated early that he had his mind set on making this a difficult night for the champion, by retaliating to ’The Krusher’s early jabs, with a right-left counter that showed some surprising hand speed and power of his own.  Agnew’s high and tight, peek-a-boo defence, was also posing some questions for the Kovalev offence, as Agnew looked to defend well, but keep the champion’s respect with some stingy counters.

In the last minute of the 1st round, as Kovalev seemed to be warming to his task a little more, Agnew landed a low blow that sent ’The Krusher’ down, wincing, to his knees.  While Kovalev took about 20 seconds to recover from his blow to his personage, referee Samuel Viruet gave the challenger a rather stern talking to, and was seemingly of the opinion that the foul wasn’t quite as accidental as it could have been.

The 1st round ended with the challenger’s tactics quite clear, to keep a good defence, while firing out occasional counters, and doing what he could to disrupt the champion’s rhythm. This was a strategy aimed at trying to take Kovalev into the later rounds and to wear him out along the way.

Between rounds, Kovalev’s trainer, former world champion John David Jackson, told Kovalev to hit the challenger’s arms, and Kovalev began the 2nd round with increased intent, and doing just that. Agnew continued to reply to the champion’s pressure with some good counters of his own, while they didn’t trouble Kovalev, carried enough upon them to earn his respect, and dissuade him from simply trying to walk through his challenger. ’The Krusher’s ability to pick his spots is impressive, and for his opponents, a little frightening. Near the end of the 2nd round, Kovalev punctuated a sparkling combination to Agnew’s arms with a sharp left-hook around the side of the challenger’s peek-a-boo guard, sending Agnew down hard onto his front. Agnew regained his feet at eight, and then was saved from further punishment by the bell ending the round. Agnew returned to his corner with an expression that said that he was perhaps reviewing his pre-fight assertion that Kovalev ’was nothing special’.

It was the first time in his professional career that Agnew had tasted the canvas, but the challenger wasn’t ready to just fold up or give in just yet, and came out for the 3rd surprisingly fresh, and throwing counters, as Kovalev jumped upon him quickly, and attempted to carry on where he had left off at the end of the previous round. Near the end of the round, Agnew was down again, after taking a left-hook to the body and being bundled down, while trying to grab hold of Kovalev. This was ruled a no- knockdown by the referee, but it was becoming plain that Agnew faced a trail of endurance if he was to stay in the contest.

The 4th round found Kovalev being a little less frenetic in his attack than he was in the previous round, perhaps aware that Agnew was now on the verge of taking him into territory that he had not visited for quite a while, and so paced himself accordingly.  The champion was now probing and pot-shotting, while Agnew continued to defend and bravely resist his occasional counters still firm and determined. In the last minute of the round, Agnew landed one of his best punches of the night, a good left hook to Kovalev’s body, and the pair clashed heads, causing a cut to open underneath the eyebrow of the champion’s right eye. With blood flowing in a thin trickle beside his right eye, Kovalev lost his rhythm and momentarily his cool, as he missed with a wild left-hook and fell to the canvas. The champion still looked perturbed as the bell sounded to end the round.

Kovalev had regained his poise by the start of the 5th round, told again by his trainer during the minutes rest to take his time, Kovalev continued his assault upon his challenger’s arms, switching now and then to the body. Agnew’s arms had begun to dip lower on occasions, as he registered the body attack. Kovalev’s work was intense but measured, with his shots beginning to spear now with an easier accuracy through the middle of the challenger’s guard. Agnew’s resistance was admirable, but his retaliatory counters had by now become expressions of a fight for survival, rather than a fight to win.

Kovalev seemed to sense that his challenger’s strength was ebbing, and as the 6th round opened, he increased his attack. ’The Krusher’ landed a left to the body, followed by a right hand, and left hand to the head, and Agnew touched down in the corner, ending up sitting on the bottom rope, and forced to take a count, despite protesting to the referee that he had not gone to the floor. When the action was waved back on, Kovalev went for Agnew’s body with an increased viciousness, his lefts digging into Agnew’s right side, provoking the challenger to bring his arm down in an attempt to cover the right side of his body. There was a short reprieve for Agnew, when his right elbow accidentally cut the champion over the left eye. However, this cut wasn’t as bad as the earlier cut opened over the right eye and Kovalev simply shrugged off this latest annoyance, and continued his assault of Agnew, switching from body to head, then back again.  On his return to his corner after the 6th, Agnew was showing all the wear and tear of being only the fourth man to take ’The Krusher’ past the 3rd round in his professional career, and only the second man to take him past the 6th stanza.  His left eyelid was swollen and his mouth was battered and bloody.

Kovalev was on Agnew once more at the start of the 7th round, digging his left repetitively to the body, as a weakening Agnew backed up into a corner. The end, when it came, was fairly undramatic, with a left jab to the body from Kovalev, proving to be the final chop needed to bring down his brave and stubborn challenger. Agnew collapsed to his knees in the corner, and stayed there with his head bowed down, as the referee counted him out.

In a sporting touch, which was nice to see, ‘The Krusher’ pulled back two follow up punches as Agnew went down. It is a little thing perhaps, but a rare gem of humanity in a business that too often seems embarrassed by such things.

Despite his nickname of ‘The Krusher,’ Kovalev is for the most part refreshingly gentlemanly and respectful.  He did  make an exception  in the post fight interview, when asked for his views upon the chances of a unification fight happening with WBC title holder Adonis Stevenson, describing Stevenson as a ‘piece of shit’.

With Stevenson having run over to Showtime, rather than staying at HBO, and facing Kovalev in an eagerly awaited showdown, ‘The Krusher’ may well have to look elsewhere for any potential ’superfights’.  Kovalev, with his fan-friendly fighting style, and willingness to take on anyone, allied to an ability that we have not seen properly stretched yet, may well soon pass the point of needing to fight Stevenson in order to be regarded as number one at Lightheavyweight, and one of the elite champions pound-for-pound in the world today.

‘The Krusher’ rolls on, and who knows where he will stop.