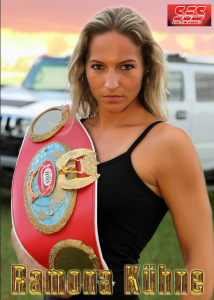 previously undefeated the lesser experienced Gina Chamie (8-1, 4 KO’s) at the MBS Arena in Potsdam, Brandenburg, Germany. The fight brought little in the way of a challenge for the champion, who was taking part in her 12th successful world title affair that also includes bouts for the WIBF light welterweight, lightweight, and super featherweight titles earlier in her career. In what was a relatively dull contest, Chamie, the current WBC Youth lightweight title holder, took a standing eight count towards the end of the sixth round after injuring her elbow. The injury prevented the challenger from continuing, with the stoppage coming between rounds: the official ruling as a seventh round TKO for Kuehne, marking her seventh consecutive victory and third stoppage win in her last four contests.

Kuehne has held at least one super featherweight title since early 2009, and has held her current three since June of 2010. Her one defeat came in 2010 against Ina Menzer when the bout was stopped in the sixth frame due to a cut. The WBC, WIBF, and WBO featherweight titles were all up for grabs in that bout. Chamie has been among the pro ranks for less than years’ time, her lack of experience and quality opposition being evident in this bout despite her number 14 ranking (as a lightweight) by boxrec.com.

Argentina held three world title contests this weekend, all on separate cards and all being headline events. The undefeated IBF super flyweight champion Debora Anahi Dionicius (16-0, 5 KO’s) made the fifth defense of her title against Colombian Neisi Torres (11-2-1, 7 KO’s) in Buenos Aires. The champ put a relentless attack from the start, and after four one-sided rounds, Torres finally succumbed to the repeated body shots with Dionicius sealing the deal with a few unanswered headshots for good measure. The bout was waved off at the 1:43 mark of the fourth round. It was Dionicius’s first stoppage victory in two years after going the full 10 round distance in her previous seven contests. This was Torres’ first bout of the year after fighting nine times in 2013. Her record is built on severely over matched opposition; the 11 opponents she’s defeated had a total of four wins among them. Her other loss came against WBO bantamweight champ Daniela Romina Bermudez by first round knockout last year.

Also in Buenos Aires, Mayra Alejandra Gomez (15-3, 4 KO’s) was successful in her second attempt at a world title, defeating Carolina Gutierrez (21-3-1, 13 KO’s) over 10 rounds to win the interim WBO bantamweight championship. Gomez fought Carolina Duer last July for the full title which, was then vacant, but lost a close decision. Gutierrez had been unbeaten in her previous eight contests, last losing to world champion Susi Kentikian in 2009. She also held the interim WBA super flyweight title from 2010 -2012 before moving up in weight.

Two world champions fought on a card in Cordoba. WBO super bantamweight champion Marcela Eliana Acuna (41-6-1, 18 KO’s) retained her world title with a sixth round knockout of Estrella Valverde (9-4-1, 1 KO). This was Valverde’s second consecutive loss and third failed attempt in a title bout. Acuna, who is also the former WBC and WBA super bantamweight champion, has won her last four bouts and has only lost once since 2005; she lost a 10 round decision to Carolina Duer in 2012.

On the same card, undefeated WBA super bantamweight champ Yesica Patricia Marcos (23-0-2, 7 KO’s) fought a non-title match up against Silvia Fernanda Zacarias (8-15-5, 1 KO), and took an easy six round decision. Marcos has been a world title holder since 2010 when she won the interim WBA female super bantamweight title. Eighteen months later she would add the interim WBO title to her credits and by the end of 2012 was recognized as the full champion by both organizations after defeating Dayana Cordero. Overall, she is unbeaten in eight world title contests. Zacarias has now lost six of her last seven fights.

Swedish junior middleweight Mikaela Lauren (21-3, 8 KO’s) defended the UBO title in Stockholm against Esther Mashiya (9-5-2, 1 KO) in a bout with the interim WIBA strap also on the line. Lauren took a one sided eight round decision over the South African champ, winning her second bout since a failed attempt at the middleweight world title against Christina Hammer last year.

In South Korea, a scheduled bout between IFBA minimum-weight champion Ji-Hyun Park (19-2, 5 KO’s) and former WBC Youth minimum-weight title holder Anahi Torres (12-11, 2 KO’s) has been postponed due to a minor injury suffered by Park that will keep her out until sometime in April. Park has held the title since her sixth pro bout in 2006, her only loss since coming in a North Korean bout in 2007. She’s made 14 successful defenses of the belt. Torres had a rough start to her career, losing 10 of her first 15 contests before going on a seven fight winning streak that was snapped last August by Susana Perez.