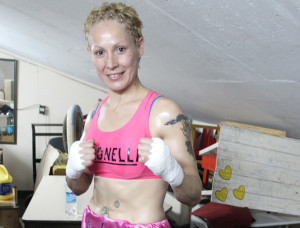 With both the height and reach advantage, Maderna was in control from the start. The right hand was her money punch, and she was able to daze the challenger near the end of the second round and again midway through the third. Nearing the midpoint of the round, Vasarhelyi was dazed for a second time, and a series of unanswered shots that had the challenger staggering towards the ropes prompted referee Anibal Andrade to wave off the action at the 0:57 mark of the round.

This was the second title defense for Maderna, who won the title last June, defeating Enis Pacheco. After a rough start to her pro career, losing more than half of her bouts, she’s managed to tally an 8-1 record since 2010, losing only to IBF super featherweight champion Claudia Lopez. Vasarhelyi was on a three fight winning streak coming into this bout. It was her third match of the year after fighting eight times in 2013. She has lost in two prior title attempts; to WBF light welterweight champ Rola El Halabi and EBU light welterweight title holder Sabrina Giuliani.

In non-title action, IBF lightweight champ Victoria Noelia Bustos (11-3) was beaten by Natalia Vanesa del Valle Aguirre (6-1-3) in a six round contest in Argentina. This was the second time Aguirre has beaten he world champ; last June she also won a six round decision.

Another non-title bout in Mexico as WBC light flyweight champion Ibeth Zamora Silva (20-5, 8 KO’s) won in eight rounds over Judith Rodriguez (6-7, 4 KO’s). Silva won the title in March of 2013 and has made two successful defenses while Rodriguez is now on a five fight losing streak.

Winning her first bout in two years, Mayela Perez (11-15-4, 7 KO’s) took a 10 round decision over Alejandra Lopez (1-2) to win the vacant WBC Silver minimum-weight title. Perez had fought just once each in 2012 and 2013, scoring a loss and a draw respectively before Saturday’s victory. In 2006 she was stopped by Ana Maria Torres in a contest for the WBC super-flyweight title.