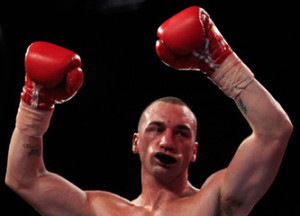 vs. New England in the boxing ring. Monaghan, the undefeated Long Island based light heavyweight , has been getting some serious exposure the last few years, repeatedly turning up on some major under cards. The Long Beach resident is the current WBC Continental Americas light heavyweight title holder with three successful defenses and has scored five knockouts in his last seven contests. In January he fought on the Garcia-Burgos card and scored a first round stoppage of Matt Vanda. “Irish Joey” McCreedy of Lowell, Massachusetts, hasn’t had the same success. In 2009 he had won and once defended the EBA super middleweight title, but later failed in bids for the New England and USBO super middleweight belts. He comes in off two decision wins.

Oscar Valdez (9-0, 9 KO’s) vs. Adrian Perez (10-4-1, 1 KO)
The 23 year old Mexican knockout artist hasn’t even been a pro for two years, but the two time Olympic qualifier and amateur champ stays busy and keeps his fights short. Perez’s lone stoppage came in his pro debut, he comes in off three decision wins.

Mark Anthony Geraldo (29-4-3, 13 KO’s) vs. Raul Hidalgo (21-10, 16 KO’s)
Geraldo is the current WBO Asia Pacific Youth super flyweight title holder and comes into the bout on a seven fight winning streak with his last three wins by stoppage. Hidalgo’s been in with some top talent, but fails every time he steps up his level of opposition. He has two stoppage wins this year over inexperienced opponents.

Esquiva Falcao (1-0, 1 KO) vs. Pubilo Pena (2-0, 1 KO)
Falcao is a 2011 World Amateur Championships bronze medalist and 2012 Olympian. In the London games, he was the first Brazilian boxer ever to reach the gold medal round. Undefeated Pena lost his pro debut in 2012, but the ruling was changed to a no contest after his opponent failed a drug test.

Oleksandr Gvozdyk (debut) vs. Mike Montoya (4-2-12 KO’s)
The 26 year old Ukranian makes his pro debut two year after winning the bronze medal at the 2012 London Olympics. After six pro bouts, Montoya was inactive for three years before coming back to win a four round decision last May. This is his first bou since then.