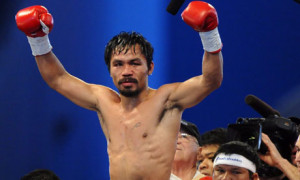 A fairly entertaining tussle at the top of a sub-par card, Pacquiao-Bradley started out as a fast-paced battle, but quickly settled into its groove as a contest between two fighters trying to pick their spots.

Bradley had managed to keep the bout fairly even through the first half of the contest, slowing Pacquiao’s momentum with hard body shots and solid counters.

By the end of the seventh round, though, Pacquiao had taken control and was landing the more meaningful shots against a Bradley who was beginning to wing wild punches into the air and clown, uncharacteristically, for the benefit of his own confidence.

It was hardly a glorious affair for Pacquiao, but at the same time, it was hard to score against him as he began to tighten up his offense while Bradley’s own offense fell apart. As a matter of fact, The Boxing Tribune only gave Bradley one round after the sixth.

A headbutt in the final seconds of the twelfth round opened a cut over Pacquiao’s left eye, but it did nothing to affect the final outcome of the bout.

Pacquiao’s focus will likely be set on a fifth bout with Juan Manuel Marquez and yet another shot at erasing a tough loss.