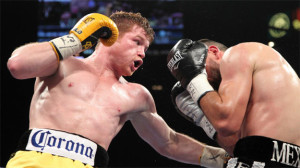 Previously confirmed as a pay-per-view, Alvarez-Lara is the fight most hardcore fans demanded of the 23-year-old Mexican star after impressing in a one-sided TKO victory over Alfredo Angulo in March. Lara even confronted Alvarez in the post-fight press conference that evening, demanding the next shot at upending the Canelo bandwagon.

“No more need to talk,” Lara stated via his own Twitter account Sunday night. “Now its time to fight.”

Cuba’s Lara, who is the “regular” WBA junior middleweight champ, was scheduled to defend his title on May 2 against former world titlist, Ishe Smith. Lara, of course, has now officially pulled out of that bout in favor of the more lucrative Alvarez showcase.

Golden Boy CEO, Richard Schaefer has also confirmed that Alvarez-Lara will be a non-title bout. According to Schaefer, Alvarez has no interest in the “regular” WBA title when he considers Floyd Mayweather to be the true WBA world champ in the division and, therefore, doesn’t see any reason to pay the 3% sanctioning fee to the organization.

Another possible reason for the decision to make this a non-title bout may center around the rigidity of the 154 lb. limit in title bouts and Team Canelo’s concern about being able to make the weight limit.