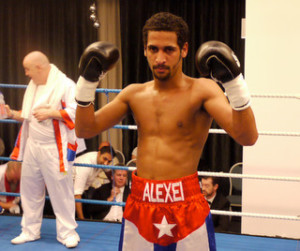 scheduled 10 round contest headlines a televised triple header ShoBox card to be televised by Showtime and promoted by Mike Tyson’s Iron Mike Productions.

Collado turned pro in 2008, and rattled off 14 straight knockouts before Franklin Varela managed to take him the distance for the first time. He then went inactive for nearly 18 months before returning in March of 2013, and has since went 3-0 with two stoppage wins. His last outing in February was an eight round decision over Edgar Riovalle in February.

Salka comes in off a 10 round decision loss to Ricardo Alvarez for the WBC Continental Americas light welterweight title, but prior to that bout he had won the IBO International light weight title and successfully defended the NABA title he won with a fifth round stoppage of Emmanuel Lucero in February of 2013.

Also on the card undefeated welterweight Felix Diaz (14-0, 8 KO’s) faces Emmanuel Lartei Lartey (15-1-1, 7 KO’s) in a scheduled eight round bout. For the highly regarded Diaz, a 2008 Olympic gold medalist, this is the toughest opponent he’s faced to date. Lartey, a former ABU and Ghanaian light welterweight title holder was unbeaten until this past October when he lost a decision to another Olympian, American Errol Spence. He’ll be celebrating his 33rd birthday on fight night and hoping the adjustments he’s made since the Spence fight will pay off for him.

Undefeated welterweights Samuel Vasquez (13-0, 9 KO’s) and Juan Rodriguez Jr. (11-0, 5 KO’s) meet in the night’s opener in a scheduled eight rounder. Its Rodriguez’s first televised contest, and the New Jersey Golden Gloves champ hopes a winning performance can give his young career a boost to bigger and better things. Vasquez comes in on a four fight knockout streak, with his last two bouts coming just three weeks apart. He’s been a pro for just over two years.