“If people knew how hard I had to work to gain my mastery, it would not seem so wonderful at all.”
― Michelangelo

Last Saturday night at the DC Armory, the 49-year-old IBF champ Bernard Hopkins once again proved himself to be the master of pure engine efficiency and old school fundamentals by schooling 30-year-old WBA titlist Beibut Shumenov.

True, Shumenov is no Bob Foster (or even Adonis Stevenson or Sergey Kovalev), but the Kazakh was a solid enough main stage presence, regarded as a top five light heavyweight by most. A one-sided schooling is an impressive feat made even more impressive by the fact that it was dished out by a man who, by all boxing logic, should’ve been retired a year before Shumenov even made his pro debut. 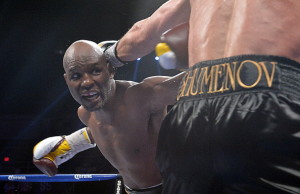 Hopkins, as is usually the case in his post-40 run, did what he had to do and controlled the pace and rhythm of the fight with little more than an arsenal of basic boxing fundamentals, fine-tuned over the course of twenty-six years in the game.

There is a theory on the fringes of polite boxing society that maybe there’s more sizzle to B-Hop than actual steak, that maybe we’re enamored with the idea of what Hopkins’ longevity seems to represent and, therefore, are creating too big of a  deal when it comes to recent accomplishments.

This may have been a valid argument five years ago, but Hopkins is now past the point of being a quaint novelty act.

Recent decisive wins over Beibut Shumenov, Tavoris Cloud, Karo Murat, and Jean Pascal would make any pug a legitimate main stage player in this day and age– and are certainly comparable in substance to the high-water marks of current 175 lb. darlings Adonis Stevenson and Sergey Kovalev. Factor in age, longevity, and historical significance and the case for Hopkins makes itself. He may not be everyone’s aesthetic cup of tea, but boxing is still, ostensibly, a sport and a fighter’s merit is judged (again, ostensibly) by his ring record.

Love him or hate him, Hopkins is still here– and deservedly so.  He is an all-time great and his story is one worth studying and replicating.

There’s no shortcut to greatness and, barring a unique, god-given gift, most success is achieved through trial and error, gallons of sweat, and an almost manic belief in one’s self that would justify devoting a lifetime to achieving greatness.

Bernard Hopkins, the legend, the Hall of Famer, was not born. Hopkins’ success and greatness was forged in musty gyms, behind dank prison walls, and in the thousands of thankless hours spent honing a craft that way too few people appreciate.

“The Executioner” (I’m choosing to ignore the silly “Alien” gimmick)  wasn’t born with super-human reflexes or with the benefit of a famous last name. Every achievement by the former middleweight and now-current two-belt light heavyweight world champ was, indeed, an achievement. Every old school trick carries the price tag of years of work and study.

None of this is a secret, yet, more and more, it’s becoming a price that too few boxers are willing to pay. There are too many shortcuts to stardom, too many ways to get around doing the hard work these days. Many of those sporting world titles right now would’ve been fringe-contending journeymen just one generation ago because, as we saw Saturday night, there is no substitute for actually learning the art of prize fighting.

Boxing mastery, just like any other type of mastery, requires a professional work ethic bordering on obsessive. Despite what our mothers have told us, we are NOT all stars. It’s only those who pay their dues and take the time to master their jobs who go on to truly succeed.

Success assumes no moral high ground. Bad people often succeed, Good people often fail. But those who do go on to professional success have two things in common– hard work and dedication.

Enjoy a guy like Hopkins while you can, because he is a dying breed– not only as a fighter, but as a professional.
*******************
Beware those in the boxing media who don’t actually like or even appreciate the craft and art of elite-level prize fighting.

The best way to gauge our media is by comparing them to the way media in other sports conduct themselves. Can you imagine a baseball beat writer dismissing solid fundamentals as “boring” or joking about falling asleep during a perfectly-executed double play?

We get that regularly among the self-important “journalists” at the top of the boxing media food chain. Rather than show respect for the skills of fighters who actually take the time to learn the craft, many in the media downplay those skills, label them as boring, and downright mock them.

Hopkins gets somewhat of a pass these days because of his age and because most writers (myself sometimes included) are suckers for a good underdog story. But just as Guillermo Rigondeaux and Floyd Mayweather get ripped for their unwillingness to play into the media’s homoerotic macho male fantasies of fighting, Hopkins still gets plenty of flak as well.

You can’t help but wonder why these guys, who so obviously don’t appreciate or value boxing in its purest form, ever chose to write about the sport in the first place.

With the major players in the boxing media busy pigging out at the trough of free swag and congratulating themselves for being “boxing writers,” it’s no wonder so many boxing fans have also lost an appreciation for the sport on all levels. If your own mainstream writers don’t appreciate the sport, how can you expect the fans to? And if the “experts” don’t really know the sport, how can they educate the casual fan?

The fact of the matter is that mastery doesn’t excite many people these day– we want disasters. If the same brain trust behind boxing worked with the Indy 500, we’d get all car crashes and the actual race would be incidental. Hell, why watch all the “boring” NFL plays when all we really want are the bone-crushing tackles and long-range bombs?

Boxing has always been a sport of strategy, craft, and mastery– especially at the elite level. If today’s elite level bouts aren’t matching up to the excitement of Leonard-Duran or Hearns-Hagler, maybe it’s not the the fault of the fighters being TOO skilled (i.e. dull). Maybe it’s the politics preventing the best fights from getting made or the diluting of the talent pool by the sanctioning bodies; Maybe it’s the awful amateur system that has essentially turned boxing into fencing. Maybe it’s the fighters, themselves, who seem all too eager to indulge in “supplements” and fancy-pants strength training at the expense of some of the indispensable basics.

But maybe this is all just a cultural thing. Focus doesn’t seem to be “our” thing anymore.