World heavyweight champion and owner of every significant belt aside from the WBC strap vacated by his older brother Vitali, Wladimir Klitschko (61-3, 51 KOs), returns to action on the main American TV network of ESPN this weekend to take on Australian hopeful Alex 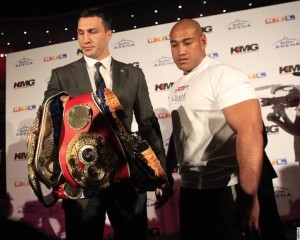 Leapai….and the way things have been going, he may also have to knock out former heavyweight champion and current desperate huckster Shannon Briggs before he leaves the arena in Germany.

After Wlad’s less than enthralling victory over Russian Alex Povetkin on his last outing, you know he is going to be coming after Leapai, who earned this title shot by defeating the formerly heavily hyped and unbeaten Denis Boytsov–who, finally freed from a restrictive contract with bankrupt promotional outfit Universum, showed up uncharacteristically out of shape against Leapai in an eliminator to meet Klitschko.

Boytsov must have thought Leapai was a pushover and therefore he didn’t have to train to his usual bodybuilder standards, because against Leapai he was overweight and out of shape, breathing hard through his mouth by the third round. Leapai, who may not be Ali when it comes to boxing skills, but who is as strong as an ox, laid a beating on Boytsov, using heavy body shots to sap the Germany-based Russian’s strength, knocking him down in the seventh and ninth rounds. Boytsov tried to rally, but Leapai prevailed and hit Boytsov with another thunderous body shot in the final round, earning the right to fight Wladimir.

Too bad for Leapai (30-4-3, 24 KOs), who certainly possesses the power, if not the boxing skill, of his colleague from Down Under, David Tua, that he isn’t fighting Boytsov this time, but instead a man who hasn’t lost in nearly a decade. One still reads criticisms of the Klitschko brothers’ “winning boring decisions,” which is pretty stupid considering that Wladimir sports an obscenely high KO ratio of 79.69% while his older brother is virtually tied with Rocky Marciano for the highest heavyweight KO percentage ever at an amazing 87.23%.

In comparison, the great Muhammad Ali’s KO percentage was 60.66%

Leapai has the proverbial “puncher’s chance” in this bout. He needs to try to get to Wlad’s body and get him to drop his hands, then perhaps get to Wlad’s not always reliable chin, perhaps land one of his patented uppercuts on the champ. But Wladimir will have covered all the bases and is in spectacular condition, and will want to impress ESPN American viewers with one of his Calvin Brock-style highlight reel KOs. Though Leapai is tough and will give it a go, when Wlad’s sledgehammer jab starts landing, all Leapai’s plans to get inside will likely go out the window. Then he’ll be increasingly vulnerable to a smashing straight right hand from the champ.

I’d say the Aussie on the mat and out by round five. 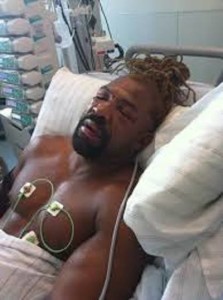 The wild card in all of this is Shannon Briggs. He’s been stalking and insulting both Leapai (who wanted to fight him at yesterday’s presser and was held back by Wlad) and the champ, who looks at Briggs like he’s a piece of dog excrement on the sidewalk. After all, Vitali Klitschko already almost killed Briggs when they fought in 2010, a payback for years of Briggs saying the most nasty things imaginable about the Klitschkos on every online boxing forum he could find. Briggs ended up spending two weeks in a German hospital with various injuries, his face broken in three places, his bicep torn, etc. He’s lucky to be alive after that fight.

Suddenly, after four years of doing not much, Briggs has shaved his trademark braids, gotten in what appears to be great shape (with help from what we can only guess), and is acting like one of those homeless guys you see raving on the street. He has “won” two absolute joke fights in the last two weeks, the latter of which this writer swears he probably could have won almost as quickly as Briggs did (27 seconds, to be exact). Briggs has added a bizarre element to this fight, stalking the champion (who remained ice cold), throwing a shoe at him at training camp, challenging both he and Leapai at the presser.

If in the middle of this fight, Briggs, who should be banned from the arena, jumped into the ring and started swinging at both Klitschko and Leapai, it wouldn’t be a huge surprise. He is obviously a very desperate man, and at this point seems more suited to the WWE than to boxing.

Should the gentlemanly Leapai lose to Klitschko, personally I’d love to see him fight Briggs next and knock him cold.