The Guillermo Jones-Denis Lebedev WBA cruiserweight title rematch in Moscow, Russia has officially been cancelled due to Jones testing positive for the banned diuretic and masking agent, Furosemide. This is the same substance found in Jones’ system after his eleventh round KO of Lebedev 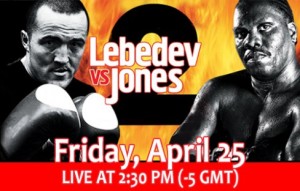 last May. On that occasion, the positive drug test prompted the WBA to strip Jones of the belt, but oddly, not of the win. In a sad twist to this story, it’s being reported that WBA officials tried to salvage this rematch by having both sides sign off on an agreement releasing the WBA from any responsibility should the fight carry on. Per the Twitter account of WBA Vice President Gilberto J. Mendoza: “The bout may happen only if the parties agree to go ahead and exonerate the WBA from any responsibility.”