A cyber-tour of some online boxing forums, something this writer usually undertakes before big fights, reveals an unhealthy level of cynicism regarding this Saturday’s WBC Heavyweight Title fight, a rematch between Haitian-Canadian Bermane “B. Ware” Stiverne (23-1-1, 20 KOs) and Mexican-American Cristobal (“Chris) “The Nightmare” Arreola (36-3, 31 KOs), taking place at the Galen Center in Los Angeles.

This in spite of the fact that the first meeting between these two in April of 2013 was quite compelling viewing, with Stiverne knocking Arreola down and breaking his nose, but the latter man dusting himself off and gamely hanging in there to make Stiverne earn an impressive unanimous decision win. 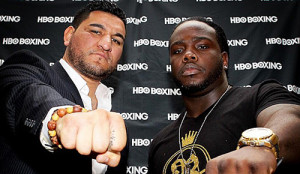 Well, after years of foreign domination, it seems many boxing fans in North America have given up on the idea of actually having “their own” heavyweight champion. Canadian/Brit Lennox Lewis took the titles away, and after he was chased into retirement by Vitali Klitschko, the latter man and his younger brother Wladimir took over, and continued the non-American domination of the heavyweight division.

There is a view out there that, even though they are supposedly not very popular in this part of the world, nobody out there is worthy of taking on the Klitschko brothers (or now brother, as Vitali is in what looks like permanent retirement), no other fighters are worthy to take the titles, so why bother trying?

In a way, this is tantamount to denying the greatness of the current world champion’s reign by saying that all of his fights are against less than worthy challengers. Yet, while this is not the heavyweight division’s strongest era, there have been many well-documented eras where the exact same thing could be and has been said.  Rocky Marciano is said to have fought old greats past their primes; Joe Louis had his famous “Bum of the Month Club,” whose title says it all; Larry Holmes couldn’t find a worthy opponent outside of a faded and sick Ali and the troubled Gerry Cooney, and had to go 15 rounds with journeyman Tex Cobb, a famously tedious fight which drove famed boxing announcer Howard Cosell away from the sport; even Mike Tyson’s best opponents were a faded Holmes and a blown-up light heavyweight in Michael Spinks, many non-Tyson fans contend.

So, it can be safely said that talent-rich eras in the heavyweight division are more the exception than the rule.   But is that a reason not to watch?

It didn’t seem to be until America totally lost its hold on the heavyweight titles. Lennox Lewis, widely admired in retirement, took much of the same criticism that Wladimir Klitschko takes now when he was actually fighting; the Klitschko brothers’ decade of domination seems to have been the last straw for many, who took their boxing gloves and either went home or to another arena to watch other weight divisions than heavyweight.

So back to Saturday’s fight. Here you have two above average heavyweights who are evenly matched and who have already given us one very good fight, with both fighters based in North America.

So why be cynical about their rematch?

One reason seems to be Arreola himself, who is undeniably likable and tough but also undeniably hard to trust. He has too often given himself an out by showing up for big fights in far from optimum condition (against WBC champ Vitali Klitschko, who charitably still predicted Arreola would be a future champion, and against Tomas Adamek, for two examples). And he apparently didn’t fully apply himself before the first go-round with Stiverne, leading trainer and good friend Henry Ramirez so exasperated that he threatened to quit on Arreola unless he changed his ways.

For his last fight, then, against the fading American heavyweight Seth Mitchell, Ramirez came up with a new strategy: taking his charge far from the temptations of his California home as a virtual prisoner and forcing him to concentrate on nothing but training.  A confident Arreola came up with an excellent performance as a result, blowing Mitchell out in the first round.

For this rematch, the same training methods employed by Ramirez for Arreola see him looking in as good a shape as he’s ever likely to be. The fact that this is his second and likely last shot at a major heavyweight title seems to have Arreola both inspired and motivated like never before, and also provides a dramatic context for the match. It’s highly unlikely that the gregarious Cristobal is shining us all on, as he often did in the past, about how hard he prepared for this bout. He’s ready this time — for real.

Stiverne, though, also looks much fitter than he did for the first fight. The WBC title belt still obviously has the ability to get fighters to focus on the task at hand. The major question with Stiverne is his consistency: he has shown himself capable of fighting at a high level, as he did against Arreola in theit first match, and is capable of laying an egg at times as he did on his first major HBO appearance, where he struggled with an obviously totally shot Ray Austin, who was on rubbery legs before the opening bell rang, before finally putting him away late.

Arreola has also been in with much tougher competition in his career than has Stiverne, whose biggest win was over the very same fighter, Chris Arreola.

Unlike Arreola, Stiverne has not fought since their last meeting in the ring. This is his chance to prove he can deliver consistently and is worthy of the heavyweight title. He insists this fight won’t go the distance and also appears very confident.

Just in case anyone thought there was a lack of tension here, the fighters even got in a verbal clash on Thursday at the pre-fight presser, with Stiverne taunting an increasingly steamed Arreola, who promised to make him pay in the ring Saturday night. Whether real or just a bit of theater to sell tickets, it made for some compelling viewing.

Ultimately, there’s no reason to expect anything here but another very good heavyweight clash. As for predictions, rationally it seems one has to respect the performance by Stiverne in the first fight and give him a slight edge.

However, there is also the motivation of each man to consider. If Chris Arreola doesn’t do it now, it looks certain that he’s never going to do it. Bermane Stiverne doesn’t have quite the same circumstances to deal with. If he loses, say, a close fight, he’s still 1-1 with Arreola and can likely get a rematch for the always popular boxing trilogy. He won’t be done by any means.

Given that fact, Arreola has far more to lose here than Stiverne. He’s a desperate man, and is primed to deliver a redemptive performance, to prove to the boxing world that he can deliver when it counts, something of which he is capable, if he ups his punch output from last time and consistently applies his pressure tactics.

This writer, then, would not be shocked to see the mild upset, with Cristobal Arreola bringing the WBC title back to America, as predicted long ago by Vitali Klitschko, in a tough, tense fight.

As a fan of heavyweight boxing, I wouldn’t dream of missing this one.