There are moments in sports when history repeats itself. The New York Rangers are headed to the Stanley Cup finals like they were 20-years-ago; the Miami Heat are on a finals collision course with the San Antonio Spurs for the second consecutive year and California Chrome is the tenth horse in 25 years to vie for the triple crown. Also, on June 7, Miguel Cotto (38-4, 31 KOs) fights Sergio Martinez (51-2-2, 28 KOs) for the middleweight championship of the world; in a strikingly similar situation to the Oscar De La Hoya-Bernard Hopkins title bout 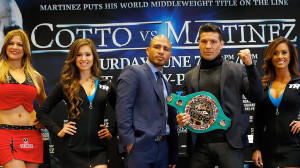 Both Cotto and De La Hoya are former Olympians who moved up to middleweight after spending most of their careers at the 140 and 147-pound divisions. The two are also natural southpaws who’ve fought in an orthodox stance, with their jab and left hook being their most affective punches. Going into the Hopkins fight the “Golden Boy” was 31-years-old and had a record of 37-3; the 33-year-old Cotto has an almost identical record of 38-4. Cotto is and De La Hoya was giving up about a three-inch height advantage. They’ve also struggled against top tier opposition. Prior to his chance at the 160-pound crown, De La Hoya was beaten by Felix Trinidad and Shane Mosely; Cotto has suffered defeats at the hands of Manny Pacquiao and Floyd Mayweather.

The “B-side’s”, as the fight promotion dictates, also share a likeness. Let’s look at the parallels between the 2004 version of Bernard Hopkins and the current WBC middleweight champ Sergio Martinez.

Both started to box late professionally. Hopkins was 23 and Martinez was two months shy of his 23rd birthday. A decade ago, Hopkins was the consensus and lineal middleweight champion like Martinez is today. The Philly legend was 39-years-old when he fought De La Hoya, the same age as Martinez is now. The Argentinian has two defeats on his record like Hopkins had then. And—as champions—they’ve had to make concessions, agreeing to fight their smaller foes at or below 159-pounds.

If you’re a Cotto fan, you hope the similarities between the two mega fights don’t carry over into the ring. Because, although De La Hoya had some early success using his speed to flurry in and out of danger; Hopkins eventually wore him down and knocked him out with a liver shot in the ninth round.

That being said, if you look at boxing’s recent history, size doesn’t always matter. In 2003, Roy Jones Jr. moved up a weight class to defeat John Ruiz for a heavyweight strap and Manny Pacquiao gave up almost five inches and 17-pounds when he beat Antonio Margarito in 2010.

So, if the characteristics of Cotto-Martinez make you ask yourself “where have I seen this before?” the answer should be, the summer of 2004. But, with less than a week to go until their tussle at the Mecca, only time will tell if Miguel Cotto makes history or if history repeats itself, with the middleweight king leaving victorious.