“Oscar is one of the stupidest guys I’ve ever met. I’m just saying what it is. The guy is really not smart. Forget just ‘not smart.’ He’s not just even average.” — Bob Arum (February, 2011)

Last week, Golden Boy CEO Richard Schaefer resigned after twelve years with the company and a run that took the Oscar De la Hoya post-career project from concept to reality to raging success.

Schaefer is accused of doing some very shady things and the subsequent turmoil within Golden Boy because of these alleged dealings led to one of two options for the former Swiss banker– Step down or be forced out. He chose the former.

Essentially, Schaefer is alleged to have used Golden Boy money and assets to promote certain Al Haymon fighters without having actually signed many of these fighters to Golden Boy contracts. It’s the equivalent of McDonald’s spending millions to research and market a new menu item that never really belongs to them and could very well be sold at Burger King down the line. 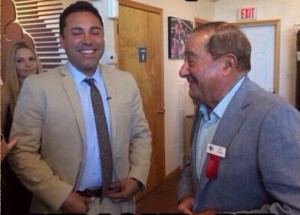 This is a serious accusation to hurl at a CEO because, really, as a CEO, it’s about the worst thing you could do. And if the allegations are true, these moves were certainly not an oversight or as a result of a momentary lapse in judgment.

As someone who works in fraud/corporate corruption detection, I certainly have my theories as to why Schaefer would possibly “go there.”

The easiest assumption to make is that Schaefer, in cahoots with Haymon, had a nefarious plan to steal the business right from under De la Hoya’s nose. And, while this cartoonish depiction of Schaefer as the silent movie villain twirling a waxed moustache in evil delight at the young girl tied to the railroad tracks is the simplest answer, it’s probably not the correct one.

More likely, Schaefer was covering his ass and creating leverage for himself in a company he felt was owned by a volatile and unpredictable president, who, perhaps more importantly, had begun to confide in and consult with people outside the company.

By keeping these fighters officially unsigned, Schaefer made himself absolutely essential to the operation, much more so than any CEO of any other “regular” company.

With Haymon controlling the talent and Showtime providing the TV access, the business was going to run smoothly through Schaefer whether there were contracts signed with GBP or not. This could’ve gone on forever and, as long as Oscar remained more logo than hands-on executive, nobody would’ve known.

By doing what he (allegedly) did, Schaefer made it so that if you removed him, the entire house of cards could crumble. He made it so that he was, personally, indispensable to the well-being of the company and likely could’ve used that leverage to stay in power if necessary.But thanks to a much-publicized Kathy Duva lawsuit, which was aimed at Haymon and Adonis Stevenson, but brought Scahefer’s practices into the light, there was nowhere for Schaefer to go but out.

It’s easy to see how Schaefer, who put in all the long hours and did all the grunt work needed to build GBP while Oscar was out partying, would feel protective of the company and would jealously defend his right to stay in charge. But he’s the CEO, not a surrogate mother and, if everything alleged is true, he put the company in a very bad spot and, of course, deserves to be gone.

Now that Schaefer is out, though, we’re starting to get a glimpse at the true mess within the organization as many of Golden Boy’s top stars are not actually signed to Golden Boy and have become increasingly more willing to affirm their free agent status. The GBP front office, accustomed to working with Schaefer, may also take a heavy hit as some, no doubt, will start looking for a way to jump from what appears to be a sinking ship.

A very much in distress Golden Boy is now in the hands of a man, recently out of rehab, who spent, by all accounts, very little time involving himself with the actual running of the company.

“Think about it. Who really ran Golden Boy?,” Golden Boy insider and light heavyweight world titlist, Bernard Hopkins recently told the media, “I’m not talking about popping up in the office once or twice a year. Who was there, doing the deals, on a day-to-day basis?…It’s got to be run by somebody.”

There are lots of moving pieces to this mess and a lot will depend on how Golden Boy’s dealings with Showtime are structured. De la Hoya controlling the TV access will guarantee him power. However, Al Haymon is also said to have much behind-the-scenes influence at Showtime. One side needs the other right now and temporary deals shouldn’t be hard to arrange, despite the alleged violations of trust.

(For an idea of what the Golden Boy landscape looks like in the post-Schaefer world and who is actually signed with Golden Boy, check out Ben Thompson’s checklist at FightHype.com.)

If De la Hoya is serious about reaching over to rival Bob Arum, though, expect dirty-bomb-in-Times-Square-level chaos throughout much of the sport and temporary roadblocks set up all over the place.

Arum, who has vowed never to work with Haymon, will bump heads with Haymon, who has done everything possible to make Arum irrelevant and the only thing between them will be Oscar De la Hoya and his “let’s be friends” smile.

As it stands right now, Golden Boy Promotions is really little more than a name with Saul “Canelo” Alvarez and a handful of young prospects counted as its assets. De la Hoya will need to sign some of the talent that has been floated through his doors, but that won’t happen if he’s talking Arum, HBO, and rainbow power.

“We can, we must and we will bring the sport that I love back to the crown jewel that it once was.” — Oscar De la Hoya (Hall of Fame Induction Speech, 2014)

De la Hoya may be absolutely sincere in wanting a unified sport, but knowing the nature of the beasts in this battle, everyone around him may already be lining up for the kill.

Nobody with any vested interest in this mess– not Arum, not Haymon, not HBO or Showtime– wants a mending of fences or building of bridges. How is it to Haymon’s benefit to risk a hot property like Keith Thurman or Danny Garcia against an Arum fighter, when the risk is great and the reward is half of what it normally would be? And, vice versa, why would Arum risk any of his assets when, under the current business model, he keeps all the loot and deals with zero risk?

Rather than a peace accord, Oscar’s heartfelt peace offerings could very well be seen as tactical surrender to the sharp, war-savvy mind of an old pro like Arum. A deathblow to Golden Boy, Arum’s most bitter rival, is suddenly within reach and it would be shortsighted to mistake the pat on Oscar’s back for a sizing up on where to put the final dagger– Yes, give me Canelo against Pacquiao, give me that huge financial windfall and a chance at absolutely ruining your company’s only star…Yes, Yes…

Meanwhile, Al Haymon controls much of what Oscar assumed was his talent.

It would be wonderful to think that the Cold War in boxing has ended with the banishment of “bad guy” Schaefer, but the fact of the matter is that things are as just as bad as ever and could very well get much worse very soon.