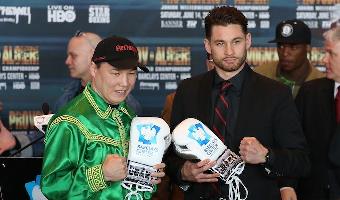 Provodnikov is one of the rising stars in the sport, following a big 2013 in which he lost a debatable unanimous decision loss to Timothy Bradley and stopped Mike Alvarado. The former ESPN Friday Night Fights mainstay made big strides and considerable improvements since being outboxed by Mauricio Herrera in 2011. Following the loss to Herrera, Provodnikov got back on track with five straight wins before the loss to Bradley.

Algieri makes up for a limited boxing pedigree with his experience as a former world champion kick boxer. He ran up a 20-0 record and won the ISKA World Welterweight and WKA World Super Welterweight Kick Boxing Championships, before turning pro as a boxer. Algieri elected not to compete as an amateur, and has had a slow and steady progression as a pro boxer. Of his 19 wins, gatekeeper Mike Arnaoutis stands out as the bright spot on his resume.

There is little mystery to the methods of Ruslan Provodnikov. He’s a two-fisted pressure-fighting brawler who comes forward and breaks his opponent’s will with a relentless body attack and compact overhand rights to the head. Provodnikov doesn’t offer much defensive resistance, which can work against him. He can take a great shot, but a boxer who can punch hard enough to stop his progress and pivot away before Provodnikov can mount his offense will have success against him.

Algieri isn’t a big puncher, but he moves well, has fast hands and is technically sound, despite a few glaring deficiencies. Algieri is quick enough to throw a double lead left hook, but he can be countered with a left hook over the top of his right hand when doing so. And despite being 5-feet 10-inches, he often dips down and gives away the height advantage he often has over junior welterweight opponents.

The left hook should be a huge weapon for Provodnikov. Algieri is susceptible to being hit with the left hook upstairs, and Provodnikov should be able to find openings to Algieri’s body as he hides behind his high guard. Algieri is the much better boxer, but lacks the power to retard Prvodnikov’s forward progress. Algieri will have to use his jab and movement to keep Provodnikov a step or two behind. He should be careful not to throw more than one or two punches behind the jab, as he’ll find himself in Provodnikov’s wheelhouse and open to be countered. Provodnikov should try to avoid following Algieri as he moves around the ring and keep the left hook in his face when Algieri chooses to let his hands go.

While this fight is for a world title and headlining an HBO Boxing After Dark broadcast, it is merely a showcase for Provodnikov, who figures to be a potential opponent for Manny Pacquiao in the fall. While Algieri is undefeated and does have a few of the tools necessary to give Provodnikov some trouble, it is hard to see him lasting past six rounds. Look for this fight to end before the end of six, and Provodnikov to solidify his place as option B, should Juan Manuel Marquez not take the fall slot against Manny Pacquiao in Macau.