“I‘ll fight him [Roy Jones] in a phone box in front of two men and a dog.” —Steve Collins

“…it’s like having your teeth broken…Yeah, sickening. That’s what it felt like, it was sickening….you feel the searing pain, then it’s gone in an instant.”—– Collins describing what it’s like being hit by Nigel Benn

In his last fight, Steve was floored heavily in 30 seconds by a blown-up journeyman, only to bounce off the canvas, impose his strength and deliver the most perfect of right hands to leave Craig Cummings horizontal in that very same round. It was the best punch he threw in his entire career…–Lee Callan. June 14, 2011. Here is the YouTube link: http://www.youtube.com/watch?v=ZILCOcFK268

Since “The Celtic Warrior” (as the Dublin-born Collins was known)will be forever linked with the great Chris Eubank and Nigel Benn, his compelling body of work warrants another look.

After amassing an 82-8 amateur record, Collins fought from 1986 through 1997 and retired with a 36-3 record. Amazingly, he book-ended his career with 16 wins at the start and 15 at the end–with a beginning and ending TKO as icing on the cake. The last nine were world title 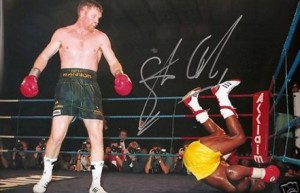 fights. Even more impressive is that this dominant iron-chinned Irishman retired as WBO Super Middleweight Title holder, something few champions ever accomplish.

Among his early victims were Sam Storey (for the Irish Middleweight Title), the late and rugged Tony “The Fighting Postman” Thornton and Kevin “Killer” Watts (for the USBA Middleweight Title.) His first loss was against future Hall of Famer Mike McCallum in 1990 for the WBA Middleweight Title. It was one that I saw live at the Hynes Convention Center in Boston; in fact, I saw Collins fight many times as he did most of his early work in the Boston area training with the likes of the legendary Goody Petronelli and commiserating (and later training with) a local boxing guy by the name of Freddie Roach.

By changing trainers somewhat frequently, Collins adjusted well to new styles and became a complete fighter retaining what he needed and discarding what didn’t to enhance his considerable arsenal.

After losing to the “Body Snatcher,” he won 5 straight before dropping a razor thin and controversial MD to Reggie Johnson (32-2-1) and a close UD to Sumbu Kalambay, 55-5-1, (a masterful defensive fighter and counter-puncher)- both in 1992. He rebounded by winning the WBA Penta-Continental Middleweight Title in 1993 by knocking out South African Gerhard Botes.

Finally, after relocating to England from Boston, Steve won the WBO Middleweight Title with a KO over the very capable Chris Pyatt (42-3) in 1994. He then would close out his career as he continued the aforementioned streak of wins. Incredibly during this run, he fought and beat flamboyant Chris Eubank twice in succession in 1995. Both fights were close and both were thrillers in front of roaring Irish fans. Eubank was 41-0-2 coming into their first fight.
Here are the two YouTube’s:

A year later, he stopped Nigel Benn two times in a row—both times in Manchester. Benn was 42-3-1 at the time of the first duke. While admittedly, both Eubank and Benn were past their prime, what the Celtic Warrior accomplished has to be considered a remarkable feat given the stature of those two legendary British warriors and the especially the fact Collins was defending his crown.

A fight with Roy Jones Jr. could never get made back in the day but in retrospect, and given Roy’s shocking decent in recent years, it may well have been a close affair with Collins giving Jones all he could handle and maybe more.

Collins, the quintessential professional, worked in Scotland, Ireland, Wales, England, Northern Ireland, France, Italy, Atlantic City, Las Vegas, the Meadowlands Arena in New Jersey and, of course, in and around the Boston area. More to the point, he was an extremely tough, tenacious, and skilled fighter who took on the very best. Hopefully, the International Boxing Hall of Fame will no longer overlook this great warrior. In fact, one has to wonder why Eubank and Benn have been ignored by the Hall as well.

Steve has not entirely faded from the spotlight since his retirement including well-publicized court appearances for some alleged personal issues. On the plus side, however, he has done some acting and also was featured in the British TV reality show Commando VIP. It put six celebrities through tough military-style challenges after being trained by three real commandos. Ironically, he appeared alongside fellow ex-boxer Nigel Benn. Collins appeared on The Weakest Link Boxing Special. He was the 6th one voted off. He also frequently helps charities by engaging in exhibition fights; for example, the Dubliner will fight Neville Brown in a four-bout charity bout in Burton-on-Trent on July 6, just two weeks before he turns 50. Says Brown, “a couple of charities will benefit from this. I’m hoping it will drum up awareness of men’s health. I’ve been to too many funerals lately….”