An hour after his fighter Ruslan Provodnikov lost to Chris Algieri, elite trainer Freddie Roach walks into a packed press room, entourage in tow, just as Algieri is wrapping up his press conference. Algieri has lost the room, all eyes are now on the five foot five Roach as he awaits his turn at the podium. When the topic of a potential Manny Pacquiao- Chris Algieri bout is brought up, Roach mumbles an expletive, clearly agitated by what just transpired in the ring.

Roach’s fighters have suffered controversial defeats before. In 2009, Pacquiao lost to Timothy Bradley in a bout that many saw him winning. The result here was the same. One of the official judges scored it 117-109 for Provodnikov and HBO’s Steve Weisfeld, Max Kellerman and Jim Lampley all thought Provodnikov won. But two local judges scored it 114-112 for Algieri, who was knocked down twice in the bout. 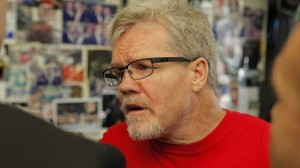 “That’s [expletive] because defense doesn’t win fights,” Roach said. “You don’t score points by making a punch miss, if that’s the case then Andre Ward would be the best fighter in the world.”

The L.A. resident has spent the last two weeks in New York, and the scruff on his face gives him the look of a man in need of his own bed. On June 7, he led Miguel Cotto to a historical victory over Sergio Martinez at Madison Square Garden. It’s a win that he places up there with Pacquiao’s performance against Oscar De La Hoya in 2009.

Just one week later, the Provodnikov loss is a bitter end to his Big Apple stay. But Roach sees the sudden shift of emotions as something that comes with the territory of competition.

The post-fight talk of a Pacquiao-Algieri fight is something that Roach isn’t buying. So who is a viable opponent for the Filipino icon?

The answer may lie in the camp of Golden Boy Promotions, who’ve vowed to end boxing’s “cold war” and work with Top Rank in order to make the biggest fights. As Roach searches for names, he seizes the opportunity to take a shot at his former student Amir Khan, one of the boxers under consideration.

“In Khan’s last fight he looked like he just learned how to punch and hold,” said Roach. ”He held a lot in that fight and made it boring, and I don’t want Manny in a boring fight. To keep our pay-per-view audience we have to fight better guys than that.”

Another option for Pacquiao is a fifth bout with rival Juan Manuel Marquez, who knocked Pacman out in 2012. Last month, Marquez dominated Mike Alvarado in route to a unanimous decision victory. And although Roach was impressed by his performance, something doesn’t pass the eye test for him.

“He looked really good, but I wonder sometimes when a guy that’s 40-years-old gets pimples on his back, chest and is with a guy named Felix Heredia [strength coach]. Something’s just don’t add up, but I don’t want to get sued too badly,” Roach says with a smile.

The first three bouts between Pacquiao and Marquez ended in a draw and two close wins for Pacquiao, who agreed to rematches in search of a decisive victory. But since his win over the congressman, Marquez has rejected a fifth fight, essentially denying Pacquiao his chance at redemption. Roach admits this scenario bothers him, but believes the fight will happen nonetheless.

“I don’t think he has many options, so I think he’ll come to the table sooner or later. I would love to get that one back one more time and Pacquiao would also,” Roach said.

Marquez may be the immediate target, but Floyd Mayweather is still the main goal. When discussing a possible Mayweather-Pacquiao clash, Roach’s head slumps and his voice lowers, as if it already is the one that got away. Yet he still expresses guarded optimism, because he doesn’t understand how a fight like this cannot happen.

“I know we’re all getting bored of it and a lot of us have lost interest and so forth,” said Roach. “But it’s still the biggest fight out there, and they both don’t have any [expletive] opponents to fight that people really want to see. So geez I hope that it happens.”

Because Mayweather is with Al Haymon and not signed to Golden Boy, Roach doesn’t see their recent split as a reason the match could be made. And he struggles to understand how promoters and representatives in today’s game could refuse to do business with one another.

“It’s still sticky because Bob and Haymon hate each other for some reason,” said Roach. “I don’t even know why that is. I know Oscar and Bob had a problem because Oscar went on his own and Bob supposedly made him. But him [Bob Arum] and Don King didn’t like each other and they still made big fights. I don’t know why these guys can’t really let everything go and just negotiate.”

Pacquiao recently signed a two year extension with Top Rank instead of going the independent route, which would’ve allowed him to negotiate directly with Mayweather. Roach was surprised by his boxer’s decision but is at ease knowing that he’ll have trusted people guiding the rest of his career.

“I thought he would go into promoting himself, but he doesn’t really have that team around him that can pull that off and without Bob I don’t think he would have anyone to protect him,” said Roach. “Because these guys are pretty sharp out there like Haymon, Schaefer and Oscar when he’s clean and sober.”

Cotto’s future is less complicated than Pacquiao’s. His independence and ability to successfully navigate through higher weight classes has given him lucrative options like Canelo Alvarez, Floyd Mayweather and Gennady “GGG” Golovkin.

“Everyone tells me how great this guy triple G is, they tell me he’s one of the best fighters in the world, but I’ve never seen him fight and I’m a fight fan, I watch fights,” Roach says while laughing. “I mean, he fights on the UHF stations, but his next fights on HBO, so I’m going to finally get to see this guy.”

Cotto’s 2-0 since joining forces with Roach and is already drawing comparisons to Pacquiao when it comes to work ethic. But there’s one difference between the two that Roach enjoys pointing out.

“Cotto’s dedication is unbelievable, he never misses a day unless I make him take a day off. I love dedication like that so he’s one of my favorite guys,” said Roach, who’s grinning and motioning as if he’s telling a secret. “Pac works just as hard, but the thing about Pacquiao is, he’s late all the time.”

By 2 a.m., the Provodnikov loss seems all but forgotten and the press room is nearly empty when Roach’s assistant comes to get him. He rises slowly from his seat, his body shaking as a result of Parkinson’s disease. But he’s not done yet, on the way out he excitedly compares Cotto’s perfect night against Martinez to a win he had as a fighter.

“You know, sometimes you have a good night in boxing where everything you do and everything you try works,” said Roach. “I’ve had them once or twice in my life. I fought this red-headed Mexican kid, [Delio] Palacios from Texas, in his home town, and he was a three to one favorite to beat me, but I won every round. It was just a perfect night you know and I got the decision.”