50 Cent has found success on levels not reached by any rapper to cross over into mainstream business ventures not named Dr. Dre. From his mainstream debut more than a dozen years ago, Curtis “50 Cent” Jackson’s accolades and accomplishments include a Grammy award, several dozen smaller music industry awards, serious acting credits, a Vitamin Water formula flavor, video games, a clothing line, and reportedly, a “Magic Stick” line of condoms is in the works. 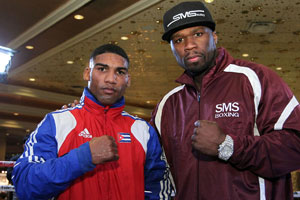 When his longtime friendship with Floyd Mayweather Jr. was reported to have led to his entry into boxing promotions under the TMT banner (The Money Team), it was assumed Jackson’s eventual rise to the top would be in the cards. With Floyd Mayweather, boxing’s biggest superstar on board, TMT Promotions would have had an automatic “in” with the biggest venues and richest deals. And while Mayweather spent the summer of 2012 serving a short sentence in a Las Vegas jail on a domestic violence conviction, Jackson went out and signed up the talent needed to provide a strong base. Yuriorkis Gamboa, Andre Dirrell, Billy Dib, Andre Berto, Celestino Caballero, and Zab Judah were among the top names linked to contracts with TMT Promotions.

But personal differences led to Jackson’s and Mayweather’s public breakup and subsequent feud, and left Jackson with the shoddy remains of what once looked to be a promising stable of talent in the early stages of TMT Promotions, now called SMS Promotions. 50 has yet to really break from the lower-middle of the pack of boxing promoters. Aside from the occasional co-promotion with Top Rank Promotions, SMS Promotions has been unable to secure HBO and/or Showtime dates for its fighters and is dependent mostly on Friday Night Fights.

Of his early stable of talent, only 2004 Olympic Bronze Medalist Andre Dirrell remains undefeated under the guise of 50, but Dirrell’s only fight was an untelevised 2013 decision over the non-descript Michael Gbenga, who came in with 6 losses in his 23 professional fights and has gone on to lose 8 of 10 since the loss to Dirrell. Billy Dib, who came to SMS Promotions with the IBF featherweight belt, lost his title by way of split decision to “The Russian Mexican”, Evgeny Gradovich. Dib rebounded with a win over Mike Oliver, but was stopped in nine rounds in his return bout with Gradovich last November. On the bright side, Dib has found a home on ESPN2’s Friday Night Fights and is scheduled to take on Alberto Garza in a ten-round non-title affair in a special edition FNF on Wednesday night. Zab Judah never fought under the SMS banner, and was instead released and picked up by Golden Boy Promotions. Also absent from SMS Promotions’ stable are Andre Berto and Celestino Caballero.

Since its inception, SMS Promotions has added young talents Luis Olivares and Ryan Martin, both undefeated prospects. Troubled former junior middleweight brawler James Kirkland has also been added to 50’s stable. Olivares and Martin have been kept busy to start their careers, with Olivares fighting six times in 2013, but only once so far in 2014, while Martin has fought four times so far this year.

Most recently, 50’s fighter with the most upside, Cuban Olympic Gold Medalist Yuriorkis Gamboa was stopped by Terence Crawford in nine rounds. Gamboa, known as “El Ciclon de Guantanamo”, has fought only once annually since being brought aboard SMS Promotions. It is Gamboa’s prior star potential combined with continued co-promotions alongside Top Rank Promotions that has allowed Gamboa to continue to appear on premium cable outlet HBO.

While 50 Cent may have found success as a rapper, actor, clothing designer, and businessman, his success has been hard to duplicate in the twisted, shady world of boxing. Major networks HBO and Showtime are in bed with Top Rank and Golden Boy Promotions, almost exclusively, and the paltry scraps are left to be fought over by the likes of established second and third-tier promoters Lou DiBella, Main Events, Dan Goossen, and Gary Shaw. It is hard to see where 50 Cent’s SMS Promotions fits in. Without Floyd Mayweather, boxing’s skeleton key to open any door, at his side, 50 Cent has found the goings a bit more difficult than he probably expected. His celebrity has carried him this far, and he seems to have found a good working relationship with ESPN and its Friday Night Fights series. But the Friday Night Fights budget pales greatly in comparison to the HBOs and Showtimes or the boxing world. The bright future some saw in the beginnings of TMT Promotions, that would later become SMS Promotions, is becoming lost in the clouds, and we’re left to wonder if and when the fighters tied to SMS Promotions bolt for the greener pastures of the “Big Two”, and the sun will finally set on 50’s time as a boxing promoter.