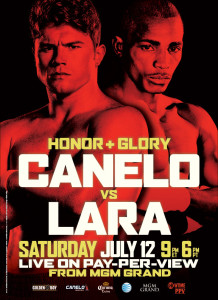 On Saturday, at the MGM Grand in Las Vegas, Saul “Canelo” Alvarez takes on Cuban Erislandy Lara in the main event of a Showtime pay-per-view bill. The undercard will showcase former champions Abner Mares and Juan Manuel Lopez. They’ll compete in separate bouts which renew the always entertaining Mexico-Puerto Rico rivalry. Mauricio Herrera will also fight, as he tries to right the wrong many felt he was dealt in his last title bout.

Mauricio Herrera gets another shot at a 140-pound belt when he takes on Johan Perez. Herrera last fought in March, when he dropped a questionable decision to champion Danny Garcia. Perez’s only defeat came against Pablo Cesar Cano via technical decision due to an accidental head-butt. He holds wins over Steve Forbes and won the interim WBA junior welterweight title when he beat the previously unbeaten Paul Spadafora in November. Herrera—who’s beaten Ruslan Provodnikov—fights off of his back foot and uses his jab to throw his opponents timing off, while looking to land counter shots. Perez should give him plenty of chances to do just that, as he leaps in and throws wide punches, many times off balance.

Lopez, a 31-year-old southpaw, was once a rising star before being stopped in round 11 of his featherweight title fight with Orlando Salido in 2011. Their 2012 rematch yielded the same results and last year he was outclassed by Mikey Garcia. So why is he back in such a high profile spot? Because his vulnerability makes him exciting and he will either knockout or get knocked out. This time, his suspect chin will be tested by undefeated Mexican Francisco Vargas, who beat Abner Cotto in March. Vargas stalks his opponents, cuts off the ring well and applies pressure throughout. If Lopez doesn’t use his impressive power to stop Vargas early, he could be in for a long night.

Mares hasn’t fought since being knocked out by Jhonny Gonzalez in the first round of their championship fight last August. The 28-year-old is a high volume puncher with good lateral movement, now with trainer Virgil Hunter, he looks to focus more on defense. The Puerto Rican Oquendo is a flat footed bruiser who charges forward with his head down and has pop in both hands. But, he too has a history of being floored. He’s been stopped by fellow islanders Juan Manuel Lopez and Wilfredo Vasquez Jr. It still remains to be seen if Mares can compete with the featherweights. His win over the faded Daniel Ponce De Leon did nothing to prove that and his notable wins against Vic Darchinyan and Joseph Agbeko came at bantamweight.