Down twice in the first round of his bout with WBO junior welterweight brawler/titlist, Ruslan Provodnikov, and sporting a right eye that looked like it had been hit with an exploding meatball, the good-looking local area kid gutted out twelve rounds at Brooklyn’s Barclays Center to take a split decision over the heavily-favored defending champ.

Holding his new belt aloft in front of a partisan crowd, the Long Island native became an instant cultural icon to many in the niche boxing audience. It seemed to be one of those unique boxing moments for which boxing nerds live. The triumph of the soul. Good kid overcomes all odds to become champ. It was enough to bring a tear to the eye of a colicky press row squirming from their pre-fight media buffet shrimp cocktails. 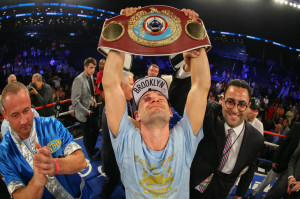 And much like the Rocky franchise after Apollo Creed was finally vanquished in the series’ second chapter; all that awaits the fans who bought into the showbiz fable is a series of increasingly disappointing sequels and the harsh realization that a good story is not always a compelling reality.

On Tuesday, word spread that Manny Pacquiao vs. Chris Algieri was a done deal for November 22 in Macau, China. All the old guy, management-types involved were ecstatic.

“Everything is a go,” Algieri co-promoter, Artie Pelullo of Banner Promotions told Boxingscene. “The financial end has been worked out. Chris [Algieri] got more than he wanted. Everything is a go…On November 22nd, Chris Algieri is going to challenge Manny Pacquiao for the WBO welterweight championship. All of the paperwork will be signed in the next couple of days, but we agreed on everything with Arum. Everything is a go.”

The guys with the wallets have every reason to be delighted. Business-wise Pacquiao-Algieri really is a win-win for all those involved with both fighters.

Coming into Provodnikov-Algieri, a win for Provodnikov was good only for the Siberian Rocky’s own bottom line.

Out of fight options tying him to Top Rank after the Algieri bout, Provodnikov would once again become the full property of Banner Promotions. If the rumored Pacquiao-Provodnikov bout was to move forward, there would need to be another negotiation about Top Rank options and a demand for a much bigger piece of the pie than Algieri would be able to leverage at this stage of his career. A victorious Provodnikov moving on to a Pacquiao date would also bring up the logistical nightmare of having two opponents with the same trainer (Freddie Roach).

Pacquiao-Provodnikov still could’ve been made, but it would prove to be a hassle and a half for a Macau-based card not likely to do blockbuster numbers in the States, anyway.

But why not roll the dice on a good-looking kid with a good back story riding a wave of warm and fuzzy feel-good press? The real life Rocky angle (or modern day Gene Tunney, as Arum says) could even sell some pay-per-views and at least push the card past the 450K mark registered for last November’s Pacquiao-Brandon Rios bout from Macau.

Arum, who was pushing the idea of Pacquiao vs. Algieri well before the Provodnikov fight even happened, was clearly aware of why an Algieri win would be better for his own bottom line.

“He’s a very well-spoken guy with a good image and the people in China will appreciate that,” Arum told Boxingscene last week. ”I also think the fight will do very well on the East Coast.”

It all made so much business sense that the Pacquiao-Algieri wheels were in motion well before Provodnikov and Algieri made their way to the ring June 14.

Provodnikov’s promoter Artie Pelullo of Banner Promotions, who reportedly wound up doing much of the heavy lifting in the Pacquiao-Algieri negotiations with Arum, would receive three options on future Algieri fights just for putting his guy against Joe Deguardia’s (of Star Boxing) Algieri.

Not making sense, though, is why the heavy underdog would have to concede options to the favorite and defending champ in order for the fight to be made– especially considering the friendly business relationship between Pelullo and Deguardia. The deal almost comes off as a pre-conciliation prize for Pelullo’s loss with Provodnikov.

Once the fight started, the HBO announce crew tirelessly marveled at the resolve of the tough underdog and, round after round, prompted viewers to admire his gutsy effort. Meanwhile, the smart money that mattered had already put all their energies into an Algieri win.

And while Algieri’s upset may very well have been a triumph of the soul as well as a cash windfall for the suits behind the trunks, the realities of the actual upcoming fight may not be as win-win for consumers.

Algieri’s split decision over Provodnikov was not without its controversy, as many felt that the 30-year-old underdog, who did land and throw more punches according to Compubox, fought a negative fight for survival over twelve full rounds.

Actually, there were moments in the first half of the fight where Algieri looked more like someone fending off a swarm of raging hornets than a main stage prizefighter. Following a two-knockdown first round, Provodnikov kept pressing the attack against an Algieri working in perpetual retreat and launching arm punch after arm punch to keep Provodnikov off of him.

By the middle rounds, though, Algieri had begun to learn the predictable pattern of Provodinokov’s attacks and engaged in a much prettier form of full retreat while actually landing some better, but still not overly-impressive, shots.

If Algieri had not been fighting in front of his home crowd, maybe he doesn’t get the decision. If he had been some kid from Tijuana, Accra, or even Watts, it may have been necessary to come take the belt rather than merely execute a good escape plan. If the right suits had not already invested in his victory, maybe Algieri’s gutsy effort goes down as a split decision loss and serves as a lesson to be learned about having to be more aggressive in these types of situations.

As it was, though, Algieri did get the split decision nod and an agreement for a Pacquiao fight was reached in record time. Algieri will be paid $1.5 million for his efforts and will get to share the stage with a fighter in Pacquiao who has the type of fan support that turns opponents into household names.

Many in the media, caught up in Algieri’s “good kid does good” narrative, were actually calling for Pacquiao-Algieri almost from the very moment Algieri was handed the WBO 140 lb. belt. This frantic, mass swooning of macho fantasies realized would save Arum and crew the effort of setting the table and grooming the marks (paying fans) for the upcoming hustle of trying to sell what could be a very ugly mismatch pitting an ESPN-level fighter against an all-time great as a big ticket event.

Pretty much a done deal now, Pacquiao-Algieri will take place on November 22 in Macau and fans will be asked to pay big money for the privilege of watching. Only time will tell, however, whether this extremely cynical and ballsy-evil matchmaking will prosper against what should be the fans’ collective BS detector. One thing boxing power brokers have learned, though, is to never overestimate the intelligence of the casual fan when it comes to being hoodwinked into a buy with the right story.