With the September 13 rematch fast approaching, Marcos Maidana (35-4, 31 KOs) finds himself in boxing’s most coveted position – A (second) chance at overthrowing the sport’s most polarizing figure, Floyd Mayweather (46-0, 26 KOs).

In order to accomplish what some say he already has…or was very close to (or not even close at all…depending on who you listen to), Maidana is going to have to pay close attention, because I am about to unleash the blueprint to crack the Mayvinci Code in a popular segment known as: Ten Things Marcos Maidana Must Do To Defeat Floyd Mayweather!

Past iterations can be found here and here.

10. In the last fight, Maidana wound up throwing a heart attack inducing 858 attempted punches throughout the 12 rounds of action (vs baby bro, Chino was able to launch 964!). In order to throw Mayweather off his normally unbreakable rhythm, Marcos Maidana is going to want to crank up the output to at least 100 punches per round. Whether or not he will be as able to perform at such a high clip against the world’s best defensive boxer may be a tall order considering he and his team no longer enlist the services of…

9. Alex Ariza. If you really want to crank up your output and torque your punching power in this age of science and technology I suggest a reconciliation with one of the more controversial assistants in the sport. Now, Maidana can always don a space mask or enter a hyperbolic blood infusing future chamber…Then again, he could also start eating some SNACs. Or El Chino can put full trust in Robert Garcia, as he’s done in the past, that he can offer him every bit as comprehensive of a program as the oft-fired Ariza.

8. While almost without exception an outstanding referee, Tony Weeks, in the opinion of some, dropped the ball in Maidana’s first bout with the Half A Billion Dollar Man. Weeks either ignored or somehow missed (?) a multitude of blatant fouls, so my suggestion would be to petition for the same referee to oversee the second bout. 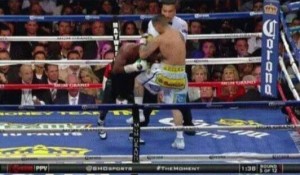 7. Now that Weeks in back in the picture, I definitely would urge Marcos to throw more knees!! It scored brilliantly in the first match, threw Mayweather off his gameplan and worked up the pro-Chino crowd to a fever pitch. While he’s at it, how about another full body tackle and some dick punches? Maybe a few quadricep shots disguised as body blows! This is a recipe for success…Read on.

6. Most definitely an important article to discuss is the Everlast MX gloves. Chino and his team didn’t pass the sniff test when representatives from Mayweather’s camp (flanked by the president of Grant, Elvis Grant Phillips) examined the commission approved gloves ahead of their initial bout. While, I’ve never seen Mayweather so opposed to a fighter using their chose of gloves, one thing was clear: Those Everlasts looked slack, like a deflated bean bag chair. That being said, even if it’s in the contract to not use that MX pair, use them anyway! Maidana should come out to the ring in them and see if Floyd Mayweather will really cancel the fight in front of a sold out house with millions (and millions) watching around the world. 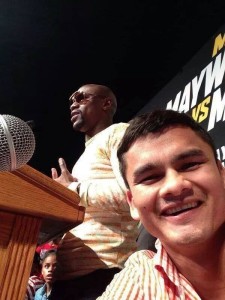 5. More selfies! Maidana taking pictures of himself being goofy while Mayweather is attempting to rehash his villin routine is priceless. Not only does it take the wind out of his sails, but it makes for a hell of a screen shot.

4. If at all possible I suggest showing the undefeated champ even less respect than before. If Marcos Maidana tries to change up his game plan I think he may not be as effective. Rough house tactics are probably the only realistic chance that he has at making a stoppage. Mayweather will likely have a better chance at controlling the flow of their second go-round, but better to stick with what worked in the first fight. “Fight dirty” as Robert Garcia would instruct his charge between rounds.

3. Make sure you have all your bases covered. If this one is indeed headed towards the judges score cards, maybe greasing a few palms with that fat paycheck that the Argentine will be getting could be beneficial as a long term investment. I suggest hiring C.J. Ross – fresh from her horrible draw decision when Floyd fought Canelo, she’s likely in need of some extra cash. Michael Pernick – Hey, he scored a draw for Chino and Floyd, what else do I need to say? Levi Martinez – Whether or not you agree with the outcome of Canelo vs Lara, one thing is for sure, Martinez seems like a safe guy to have in your pocket.

2. Jab more. It’s either factual or a widespread misnomer, but most would say that Floyd Mayweather doesn’t deal well with a good jab. Chino should set up those behind the head clubbing shots with a good stiff, pumping jab. Mayweather will likely be better prepared to deal with that tactic, so throwing a wrench in there – like a better jab – could potentially offset that.

1. Leave it all in the ring. While Maidana isn’t renowned for his strength of beard, Mayweather is definitely known to have hand problems. El Chino, should all my other advice fail (and I don’t see how that’s possible), needs to try and injure Floyd’s famously brittle hands with his face. It sounds like a bizarre technique, but trust me – He won’t be expecting it. Block enough shots with the cheekbones and forehead and Maidana will notice that Floyd output will drop drastically…And that’s when it will be time to turn it on and crank out the biggest upset in recent boxing history!