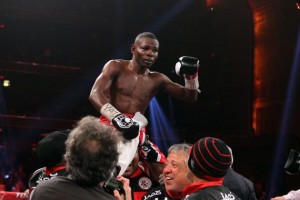 In the 1.44 seconds that it took Guillermo Rigondeaux (14-0, 9koes) to defend his World super bantamweight title against Sod Kokietgym (63-3-1, 28koes) earlier today, July 19, you could sense a quiet, almost silent fury that was almost palpable. It’s very possible that Rigondeaux was picturing the face of someone else upon the head of his opponent at the Cotai arena, Venetian Resort, in Macao, China. Certainly, Rigondeaux’s very public falling out with his promoter Bob Arum and the network HBO would have given the champion ample material for just such visualizations. Rigondeaux was as cool and relaxed as ever on the surface, but the finish of Sod Kokietgym’s world title challenge came with a clinical and venomous right hand and left hook combination which seemed to vent quite a lot of the anger and frustration, that has built up over the past 15 months.

Since he defeated and embarrassed Nonito Donaire in their unification fight last year, Guillermo Rigondeaux has been the target of an unprecedented campaign of career assassination by Bob Arum and HBO, in addition to various members of the boxing media who were happy to jump upon the anti-Rigondondeaux bandwagon. Indeed, not since the days of Sonny Liston has a reigning world champion been treated with such barefaced contempt and discrimination.

Any thoughts that the venerable Arum and HBO might soften their attitude for this defence, which marked the final fight of the champion’s contract with Arum, would have been quickly dispelled by the fact that Rigondeaux was handed a challenger who is unknown outside his native Thailand, save for two previous world title attempts, way back in 2005 and 2006. It was almost as if HBO and Arum were doing their best to place their man in a no-win situation. The pre-fight build-up could be at best described as scant. Many boxing fans seemed almost unaware of Rigondeaux’s first outing of 2014 until a few days before the event in Macao. Then, the event itself was lovingly built all around Zou Shiming; Bob Arum’s little Chinese pot of gold. Does it matter that Shiming can’t really fight at a world-class level?

When fight night in Macao finally came, Rigondeaux found himself buried in the undercard, without even the dulcet tones of Michael Buffer to announce him.

The fight started with ’The Jackal’ finding his range with his sword-like southpaw jab, seemingly with his first punch. This might have been only Rigondeaux’s second competitive outing in fifteen months, but he looked as sharp as ever. Rigondeaux was landing the jab at will, with his left-hand poised by his chest, ready to fire. While the challenger made lunging attempts to come forward, Rigondeaux manoeuvred nimbly about the ring, with his legs seemingly barely moving. The action came abruptly to a halt after an accidental head clash that looked to be caused by Kokietgym lunging forwards into the champion. Kokietgym seemed in some distress, as he recoiled back in pain, and then fell onto his knees upon the canvas, while gesticulating at the referee Mark Nelson. The challenger was still grimacing and shaking his head, after he had regained his feet and walked into a corner, while the referee talked to him. At this point, the referee seemed satisfied that Kokietgym was fit to carry on, and waved the fight to continue. The two men briefly touched gloves, in mid-ring, then, Rigondeaux landed a right hand and a left hook, which were like lightning bolts, and it is doubtful the challenger saw either punch, before falling down in a heap once more. Although he beat the count, Kokietgym looked in no condition to continue and despite his protests; the fight was waved off by Referee Nelson.

Some might try to say that Rigondeaux displayed a less than sporting side to himself by jumping upon his opponent so quickly after the accidental head clash, but the same people would probably have criticised Rigo had he allowed his challenger to recover and get into the fight. Faced with an unheralded challenger, and with everything to lose, but precious little to gain, Rigondeaux did the best and most impressive thing under such circumstances, and destroyed his opponent. For all of those who had called him boring, Rigondeaux’s display carried an air of cultured viciousness about it. Whether such a performance will encourage any of the other big names at 122 pounds to enter the same ring as him is another question. The likes of Kiko Martinez, Scott Quigg, Leo Santa Cruz, and Carl Frampton seem to be quite content to squabble amongst themselves and stay out of the way of the division’s real world champion. Now that he is free of the spiteful clutches of Bob Arum and HBO, we can only hope that he finds himself a new promoter and network, which will appreciate him, and work to get him the big fights, which he craves and deserves. Showtime executive Stephen Espinoza has already stated an interest in taking on Rigondeaux and such a move could pave the way for a fresh start for ’The Jackal’.

The ’Main event’ at Macao was Zou Shiming’s (5-0, 1ko) 10-round joust with Luis De La Rosa (23-4-1, 13koes) for something called the WBO International flyweight title. Rosa had built his record up against mostly poor opposition, and has been beaten every time he has stepped up in class, including two stoppage defeats. However, despite winning a wide point’s decision, the closest that Shiming came to scoring a stoppage against Rosa was the severe cut that Rosa suffered due to a head clash mid-way through the fight. Shiming’s lack of power is still impossible to avoid, despite the best efforts of trainer Freddie Roach. Rosa came bravely forward all through the fight, and while he never seemed to hurt Shiming, he never seemed to be overly hurt or in trouble himself, except for the aforementioned cut. Shiming has certainly improved since his debut as a professional, but improvement as a professional and being a fledgling world champion, are two vastly different things.

It is the fact that, while some amateur stars grow in ability and stature when they turn professional, (as has Rigondeaux) others find their weaknesses and limitations exposed, as they never were in the amateur world. Unfortunately, for Zou Shiming he falls into the latter bracket. At the age of 33 years old and with the whole of China following his progress, there is huge pressure on Shiming to become a world champion in the very near future. However, with even the fringe ’world champions’ at flyweight being leagues above what Shiming has had to face so far as a professional, uncle Bob Arum will have his work cut out for him trying to fix this one. Then again, where there is over one billion people, there must be a way!