Hello and welcome back to a traditional Kazakhstani horse meat flavored edition of Orlando, Florida’s number one source for number one sources, The Sunday Brunch – We are the people who crush your fantasy football dreams by comparing them with dungeons and dragons games…On this episode, we are grabbing our proton accelerator packs and hoping we don’t get slimed by Dan Rafael’s “fight freaks” when we figure out if Daniel Geale threw his chances of victory away. Also…

This week on inside the actor’s studio we examine Gennady Golovkin’s latest stoppage and whether or not Cotto is good boy. Also, we thank Roy Jones for an outstanding concert and have a glimpse into Chris Algiri’s upcoming marathon against Manny Pacquiao. So, without further ado, I gave you your instructions in the dressing room; what I say you must obey – Cuidate, escucha me, toca los manos y buena suerte…Let’s get it on!

In the off chance you missed our coverage, The Boxing Tribune’s own Phil Rivera was live and direct from Madison Square Garden for Golovkin’s dismantling of Daniel Geale, his write-up can be found here.

Gennady Golovkin currently holds the record for the most championship knockouts in middleweight history. If that’s not enough to get you hop on the Triple G express with a one way ticket to Kazakhstan, then perhaps his willingness to call out other exciting fighters in his division is.

Golovkin has stated previously that he was willing to rise or fall in weight by one division only for a mega matchup. Presumably, those fights would be with the likes of either Floyd Mayweather, Canelo Alvarez or HBO color commentator, Andre Ward. 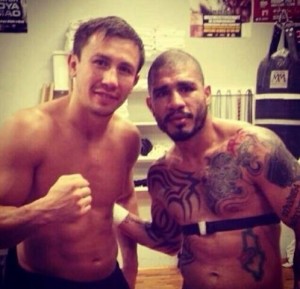 After the third round stoppage of Daniel Geale, former hip hop artist, Max Kellerman began his routine post-fight interviews and asked the Kazakhstani who he would like to fight next. To the surprise of those who say Golovkin fights only bus drivers, GGG spoke of his desire to unify the middleweight division and he called for the respective heads of Miguel Cotto, Sam Soliman and Peter Quillin.

While the Australian, Soliman may not be a household name to some fight fans (though, he holds the IBF middleweight strap), surely Miguel Cotto and Kid Chocolate ring a bell.

Miguel Cotto currently holds the WBC championship title through his dominating effort against Argentina’s Sergio Martinez this past June. Cotto’s experience and rekindled determination would make for an excellent stylistic pairing with Triple G, though, the Kazakhstani crusher would likely end things for Cotto somewhere inside of five rounds.

Peter Quillin is the WBO’s champion and poses some interesting challenges should Golovkin get the opportunity to face him. Kid Chocolate’s athleticism would likely see him through half of the scheduled 12 rounds before some of his defensive liabilities became detrimental to his health.

Defeating those three fighters and nabbing all the hardware in the middleweight division would surely lead to Gennady Golovkin’s first-ballot inclusion into the Hall Of Fame.

Live from the democratic parliamentary republic of Latvia, former pound-for-pound great returned to entertain throngs of Eastern Europeans with his fifth round stoppage of some guy named Courtney Fry for something called the “World Boxing Union (German Version) cruiserweight title”. Congrats, champ.

After the bout, Jones reminded us of his lyrical prowess when he gave an impromptu concert and played his 2004 smash hit “Can’t Be Touched” – an excerpt of which will be displayed here: I mean what I speak, I do as I say.I hustle, I grind, don’t get in my way…I’m pimping my hoes, I’m jacking my foes, I spit at the police and duck my P.O.s’. I ain’t going to court, you can call a judge [and] tell him kiss my ass, cause I ain’t gonna budge and I ain’t going back to lock-up. You trying to glock pop up, I ain’t going back to court…And I’m never gonna stop the puffing, not for nothing.

In other fake news, Chris Algieri’s supposed refusal of the 1.5 million dollar payday and once in a lifetime shot at fighting the great Manny Pacquiao was proven to be utter bullshit posturing. As many likely know, on November, 22 of this year, Algieri will fly to Macau, China for the opportunity to ply his slick run-and-jab style for as long as his eye holds out.

Unfortunately for the lottery winning New Yorker, Manny Pacquiao is much, much better at cutting off the ring and giving chase than Ruslan Provodnikov ever will be. Look for this one to end in exciting fashion as Pacquiao’s dynamic fighting style batters and stops the taller, rangier American inside of seven lopsided rounds.

Thanks for joining us again this week, next time we’ll be discussing molecular biology and we will give the real life schematics for the Mr. Fusion from Back To The Future so you can build one yourself! We’ll have interviews with Bill Nye The Science Guy and get his opinion on whether or not the climate change deniers will hang out with the TV135 deniers on the West coast of the United States in 2035 when the massive asteroid slams into the ocean causing the catastrophic loss of California! Until next time, sante!