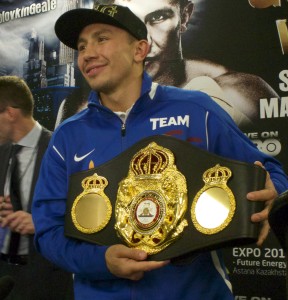 New York, New York- Soon after Gennady Golovkin’s third round stoppage of Daniel Geale in front of 8,500 fans at Madison Square Garden, the two fighters, along with Bryant Jennings–who beat Mike Perez in the nights co-feature–took questions from the press. Here are some quotes;

“Bryant Jennings is now the number one heavyweight and he’ll be fighting for the heavyweight championship sometime in the spring.”

“I worked well, I adjusted, probably should’ve started off better, but I’m learning. Perez had over 400 fights, amateur and professional, me just 36.”

“It was a great work-horse like performance and I’m pleased with it.”

“I’m very disappointed. We had a very good game plan going out there and things were going as planned to an extent, but I guess you make one mistake and you pay the penalty, unfortunately you can’t win them all, but I’ll be back.”

When asked by the Boxing Tribune if he could tell Golovkin’s next opponent one thing what would it be?

“I want a unification fight, I picked Miguel because for me I want to fight the best in boxing, if not Miguel then Sam Solimon, the IBF champion from Australia.”

When asked by the Boxing Tribune if he was surprised by the fan turnout and did it give him any motivation?

When asked by the Boxing Tribune If with this years over-saturated pay-per-view market, is there any rush to put Golovkin on pay-per-view? Golovkin’s representative replied;

“There’s no rush, the only sense there is to do a pay-per-view is if he has a pay-per-view type opponent and I think there’s three clearly out there, there’s Canelo [Alvarez], Cotto and [Julio Cesar] Chavez. Gennady’s happy to fight on HBO and we think he reaches a broader audience, we’re building his star, building his cache and we’re happy to continue building that until he gets to the point where there’s a competitive match that people are going to be willing to pay for.”